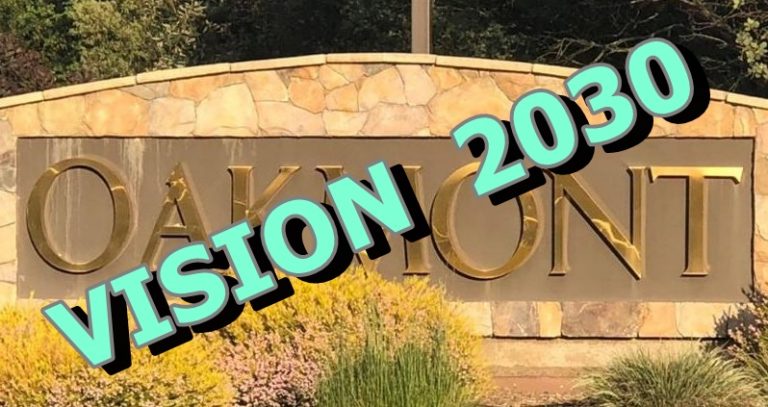 On Tuesday, May 7, an OVA workshop was held, billed in an E-blast announcement as Vision of Oakmont 2030. The official documentation of this workshop may be found at:

This workshop was comprised of an official presentation by Long Range Planning Committee (LRPC) member Jeff Young, documenting the results of extensive interviews, conducted since last summer, with residents, club presidents, realtors, other “stakeholders” and California retirement communities. In order to make the results easily understandable, the presentation largely consisted of “stories”, each one a slide headed by a “theme label” title followed by a list of word-for-word quotes from representatives of a particular category (residents – 17 stories, realtors – 6 stories, clubs – 2 stories, competitor surveys – 2 stories). This was a very effective way of representing the diverse opinions of the people interviewed, although it failed to capture the prevalence of any of the opinions. There was also one story (p. 7) entitled “Who Lives in Oakmont” consisting of demographic data from the 2010 census.

Following the slide presentation was an open forum in which anyone could express their opinions on the topic and ask questions of the speaker. The Session Notes are an attempt to capture the content of the open forum, but the recorder couldn’t keep up with the various speakers, so I recommend that, if you want to really comprehend what was said at the workshop, you should watch the video HERE, skipping the slide presentation which you can find HERE.

The LRPC is to be commended for the large amount of time and effort its members spent interviewing stakeholders and assembling the results into a form that can easily be understood. I do have some concerns, however, which I will express below.

First, and most important, the LRPC Conclusions slide (p. 32) misrepresents the stories that preceded it.

Through interviews, the LRPC identified the following needs:

Meeting these needs is essential to keep Oakmont competitive over the next 20 years and would be seen as affordable to new buyers and most existing residents.

While is is true that there were a number of the stories supporting this expansionist vision of Oakmont’s future, there were also a number of stories urging a more conservative vision:

The bias toward facilities expansion is evident, and I believe that it represents an over-weighting of the views of realtors, who are naturally prejudiced toward keeping Oakmont “competitive” in order to attract new buyers and increase their commissions. While all agree that OVA should maintain our facilities and not let them slide into disrepair, many residents could care less if Oakmont is seen as competitive with other, largely newer senior communities in the region.

Second, the Recommended Next Step slide (p. 33) seems to have redefined the concept of a vision.

Hire a community architect to create a vision of our future community we can all see.

Many HOAs around the country have established vision statements. For example:

In fact, in 2013 Larry Maniscalco of the old LPRC prepared an excellent draft for an OVA Mission & Vision Statements document, which I recommend everyone read – it would be difficult to improve on that draft. But rather than adopting that draft or developing a fairly simple vision statement, such as those included in the above examples, the Recommended Next Step seems to envision something more like a long range plan (e.g. see the various draft Long Range Plan elements developed by our own LRPC in 2012-2015, HERE) or a strategic plan, e.g. the ArrowCreek HOA 2017 Strategic Plan. There is nothing wrong with this, other than its redefinition of the word “vision”. But it is very different from the 2013 LRPC draft or from the Oakmont Vision, Mission Statement and Guiding Principles document that I proposed several months ago in Visions of Oakmont. Frankly, I think it is a bit of a cart-before-the-horse. The LRPC has collected hundreds of opinions from residents, but has not yet coalesced them into a unified vision of Oakmont, which should precede any attempt to flesh out the details for implementing the vision.

Finally, I brought up two vision proposals in the Open Forum. These are represented somewhat in the Session Notes of the Open Forum, but I also sent a more cogent version of them in a separate Email to the LRPC, so I am hoping to see them in some form in the LRPC report that incorporates workshop input. These two elements of my vision for the future of Oakmont are:

Overall, the LRPC has done very good work at assembling diverse opinions about the desired future of Oakmont. But nothing has been done to resolve the conflict between free-spending expansionists and keep-our-dues-low fiscal responsibility advocates, other than providing a conclusions slide that clearly favors the expansionist view. I foresee continual conflict between people with these different perspectives unless and until alternative Oakmont visions are composed and put to a vote of the membership. Such a vote would let us know what the majority want, and the minority would be more likely to accept the majority vision, whichever that might be.