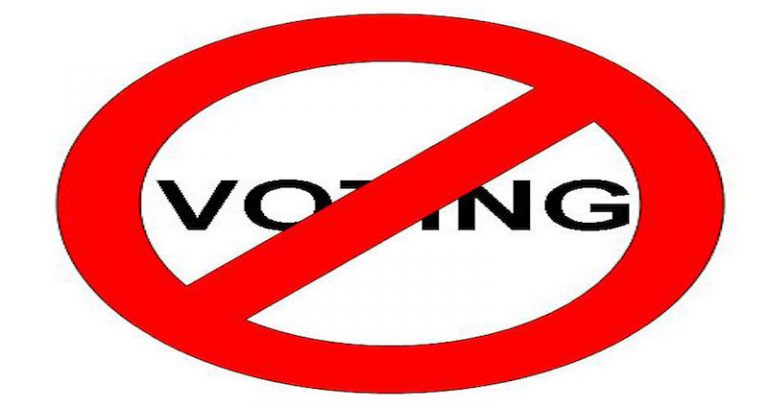 On May 6, several people representing the Oakmont Alliance delivered petitions with over 230 signatures to the OVA office, for delivery to the OVA Board of Directors. The petition required that a vote of the membership be conducted, “in the event the OVA Board of Directors intends to make an offer for the purchase of OGC.” The text further highlighted that “the acquisition of the Oakmont Golf Club (OGC) by OVA would materially increase OVA property assets, ongoing operational expenses, facility asset replacement expenses, responsibilities and liabilities … and such an acquisition would significantly alter the substance and character of the existing OVA.” The Oakmont Observer article describing the petition and its intended effect may be found HERE.

Our President, Steve Spanier, seems afraid that, should he allow a membership vote on any issue, or at least on any issue involving spending our money, the vote may not go his way. On Tuesday, in a not unexpected event, 8 days after the petition was delivered, he published his response in a President’s message — he asked OVA’s legal counsel for an opinion that would emasculate the required Special Meeting.  In the words of the legal opinion itself, “The scope of this opinion letter is limited to the Association’s legal obligations in response to the petitions.” The opinion claims that the Association has no legal obligation to allow a user vote, because members “are not entitled to force a vote on a particular matter unless such right is expressly provided by law or in the governing documents.”

This opinion may be one that would be held up in court, but perhaps not, because the petition was vetted by an HOA lawyer before it went out for signature – lawyers do not always agree, and they will try, when possible, to support a client’s position. Steve, in his President’s message on the subject, quotes Bylaws paragraph 3.3, but he conveniently leaves out that it states that a Special Meeting may be called for “any purpose or purposes whatever.” Paragraph 3.3 does not make any sense if OVA’s legal opinion is correct; it certainly cannot be the intent of those who wrote those words. Steve also announces that the Board “has scheduled a meeting for August 2, 2019 from 2 to 5 PM in the Berger Center to discuss the OGC question.” Virtually no one will see any purpose in another OGC pep rally, especially since, if Steve gets his way, the OVA’s attempted purchase of OGC may be a done deal by then.

This is unlikely to be the end of this Special Meeting petition for a membership vote. Both the Board and the Oakmont Alliance know that the precedent set by denial of the membership vote will discourage all future efforts by the membership to use the Special Meeting, because acceptance of the Board’s solicited legal opinion would mean that there could be no reason for calling a Special Meeting for anything short of recalling a director!  I expect Oakmont Alliance to explore all legal options and to build their fund in order to pay legal expenses.

Regardless of what happens with this Special Meeting petition, the response by the Board is strong confirmation that this Board will do everything in its power to prevent the membership from voting on this and any other decision, unless absolutely legally required. The Board has considerable leeway to allow membership votes, even when they are not required by law. Their decision on this matter is evidence of their elitism and of their lack of faith in the membership, as well as of their fear that they would lose such a vote. This is the most important OVA decision to be made since purchase of the OGC was turned down 30 years ago, but they hope that the OVA membership will quietly sit back and let it happen without a membership vote. Not likely.

Contact OA at OakmontAlliance@gmail.com for additional information on their movement. If you approve of recent efforts by the OA, including the DEMAND A VOTE flyer in the Kenwood Press and the petition referred to in this article, and would like to show your support, you may contribute to Oakmont Alliance, c/o Umpqua Bank, Account #4870898881 for deposits or transfers. For convenience, you may also contribute using a credit card at the Oakmont Alliance GoFundMe site.

Share this page:
Posted in Opinion
← What’s In A Vision?Oakmont Forum: Proposed Bylaws Amendments from the BRC →