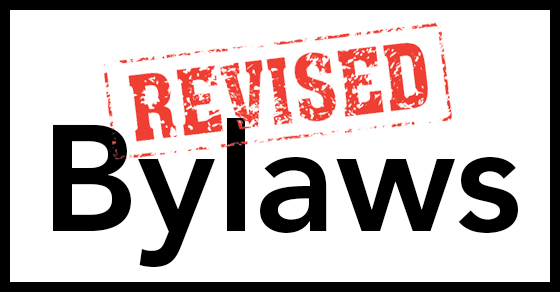 Key proposed amendments described herein include provisions which would:

This review article is not intended to cover all proposed amendments. The intent is to briefly describe the most important of them, in order to guide the reader who wishes to evaluate them. Readers who want more information than the brief descriptions provided should review the red-line version directly, since it not only shows all proposed changes but provides reasons for making the changes. The final section outlines the process that must take place in order for the proposed amendments to be enacted.

The charter of the BRC was approved by the Board on September 18, 2018, and includes the following simple goals:

According to the BRC’s Transmittal Memo, in addition to the Charter, the BRC had other important objectives:

The first of the goals of the charter gave the committee a tedious task, comparing Bylaws provisions with the latest California laws and regulations, and resulted in numerous changes throughout the Bylaws. In response to the second goal, the committee clarified and simplified the language, addressed the long-standing debate over whether an Oakmont couple should have one or two votes, and attempted to adjust the balance of authority between the Board and the members, to provide the membership with more control over Board power. This would bring OVA more in keeping with the HOA norm described in the Davis-Stirling.com page AUTHORITY OF BOARD & MEMBERS.

On May 10, the BRC delivered their final report to the OVA Board, consisting of a transmittal memo and two versions of their proposed Bylaws revision, a “red-line” version with color used to identify insertions and deletions relative to the 1992 revision of the Bylaws, and a “clean” version with the text as it would look if all of the proposed revisions were enacted. You may find these at:

In the red-line version, text retained from the 1992 Bylaws is in ordinary black or bold for headings; text deleted is in red with horizontal lines through it (example); additions are in blue and underlined; and comments explaining the changes are in bold italic black and noted by “Comment:“ following the amended section.

In the clean version, text is as you would see it in final, approved addition of the Bylaws, except for Article IV, which has two alternative versions provided because the BRC did not have a clear consensus on which version was preferable – see discussion of member voting rights below. There are also a couple of sections of comments to explain essential features to the reader.

The BRC Proposals include amendments to the Articles of Incorporation and to every article of the Bylaws, but they do not include a table of contents, so below is a list of all the Bylaws articles for your convenience in reading:

Article I Name and Location

Article V Board of Directors

A long-standing complaint of many couples living in Oakmont has been that, although they must pay twice the dues as singles, they only get a single vote per household, where common sense says they should get two votes. Others, especially singles who would rather not have their voting power diluted, prefer it the way it is. The committee was also split over this issue, so they delivered two versions of Article IV Voting with their report to the Board. Both versions have relatively minor changes to clarify meaning and bring the article into compliance with California law, but the first version preserves the one-vote-per-residential-unit rule, while the second version amends the language to provide two votes for units in which reside two resident owners. It will be up to the Board to decide which version to allow onto the Bylaws Revision ballot later this year.

AMENDMENTS TO REQUIRE MEMBERSHIP VOTES FOR APPROVAL OF LARGE EXPENDITURES

Article XII Capital Improvements is brand new, and is intended to provide the OVA membership with a veto over large capital improvements. It requires a membership vote to approve a capital improvement whose total cost is expected to exceed 20% of the average of the most recent three years’ OVA operating budget, which works out to be around $500,000 for a project initiated this year. The threshold formula is designed to increase over time as the OVA budget increases. (One unintended consequence of this is that, should OVA acquire OGC, the OVA operating budget will necessarily increase dramatically, even if the golf courses are able to fully support themselves.) For the purposes of this article, capital improvements that are “for safety and access purposes do not require membership approval.” As with Special Meetings, 60% of those voting must vote in favor of a capital improvement expenditure for it to be approved, and the quorum is 25%. Finally, membership votes are binding on the Association, and directors are deemed to have met their fiduciary duty if they abide by the results of capital improvement votes. Article XII, if enacted, would be a very important step toward making sure that an elected Board does not expand OVA facilities, and thus costs, beyond what the membership wants.

Section 3.3 Special Meetings is proposed to be amended substantially to “vest ultimate authority in the members”. The current version of paragraph 3.3 says that “Special meetings of members for any purpose or purposes”, but the proposed amended version adds “including but not limited to the reversal of actions taken by the Board of Directors”.

Taken together, these changes would make it clear that membership votes take precedence over Board of Directors votes, but it is not clear, given the recent legal opinion solicited by the Board, whether or not this Board would accept the intent of the amended paragraph. More likely, of course, this Board will not allow this proposed amendment to be placed on the ballot.

Section 3.5 Quorum and Voting retains the quorum for member meetings at 25% of the voting power of OVA, though it clarifies the language a bit. It adds the provision that “Passage of any measure at a special meeting requires the affirmative vote of sixty (60) per cent of those present at the meeting.” The supermajority requirement to pass any measure was put in place in order to guard against the possibility that a majority of a quorum would be just 12.5% + 1 of OVA voting members, or approximately 400, allowing a special interest minority to pass a measure at a Special Meeting. The 60% rule will make the vote more likely to be representative of the whole of OVA membership.

Section 5.2 Qualification and Number of Directors changes the number of directors from seven to nine. Section 5.3 Election of Directors and Term of Office is amended to increase the term of office of OVA directors to three years, with exceptions for directors appointed or elected to fill the remainder of terms for which an elected director is no longer serving. Paragraph 5.31 provides for staggered terms, such that three directors will be elected each year, unless there are vacancies caused by the departure or death of a director. The combination of these provisions is intended to bring more stability to the Board, to reduce the chances of a Board takeover by a “slate” of allied candidates and to provide more continuity of policy from one Board to the next. However, requiring candidates to commit to serving three-year terms instead of two-year terms may discourage some qualified candidates from running, and the increase in Board size would necessarily increase staffing and other costs.

Article X Amendments is changed to allow the Bylaws to be amended by a majority of OVA members voting, with a quorum of 25%. This means that as few as about 400 OVA members (12.5%) could amend the Bylaws, compared to the current requirement of a majority of all OVA voting members, or about 1,600. A large part of the reason that the Bylaws have not been amended since 1992 was the difficulty of getting a majority of all OVA voting members to vote for amendments, and this change is intended to address that problem. Because it would make it easier to improve the OVA Bylaws in the future, this proposal is among the most important proposed amendments in the package.

Bylaws may not include any limitation on dues increases or special assessments, because there are thresholds above which state law requires membership votes, and state law does not allow these provisions to be modified by Bylaws. See Davis-Stirling.com 20% LIMITATION, SPECIAL ASSESSMENT LIMITATIONS and, AMENDMENT TO RESTRICT INCREASES. Paragraph 2.61 of the current Bylaws includes a dues restriction (see next section), which must be deleted to conform to current law.

Article XII New Member Initiation Fee has been replaced with Article XI Administration Fee. While there was a desire by the Board and the BRC to implement an initiation or move-in fee for new Oakmont buyers, possibly of several thousand dollars, the bulk of which might go into the Capital Improvement Fund, this was not found to be legal under current law, which only allows fees to reimburse actual costs related to the property transfer – see Davis-Stirling.com TRANSFER FEES. The limit of $200 imposed by the 1992 Bylaws was eliminated, allowing the fee to be higher in the future if the law allows it.

The last time the OVA Bylaws were amended was in 1992, and there have been many changes in California HOA law since then. Most amendment proposals intended to bring our Bylaws into conformance with state law are minor and not very interesting – you may read through the red-line BRC proposals if you wish to know the details.

Several more steps will take place, before any proposed amendments are voted on by the OVA membership:

The order may differ from the above, and there might be more iterations (e.g. more than one workshop), but the end result must be a ballot that includes the complete text of all changes to be voted on and that is suitable for voting in a secret-ballot, by-mail election.

No amendment group will be enacted unless it receives affirmative votes from a majority of the voting power of OVA, or just over 1,600 votes. This will be a difficult target to achieve, and is unlikely to be achieved without the full support of the OVA Board. The Board may fully support and promote all amendments, or they may include some amendments that they are not in favor of and either provide only lukewarm support for them or even recommend against voting for them.