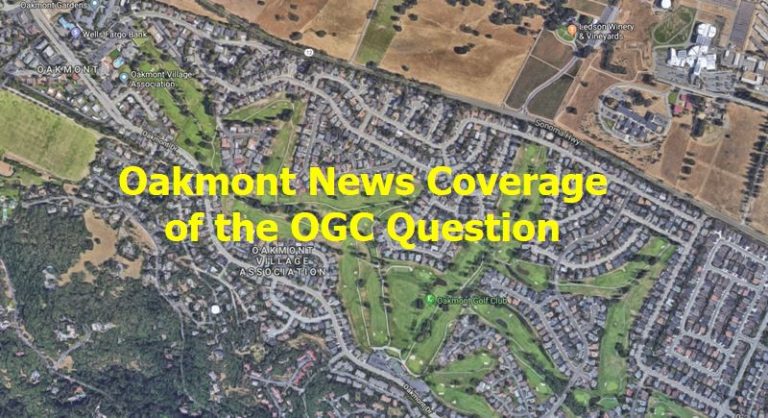 This is the final in my 3-part editorial series addressing issues with the current process being used to decide on whether and how OVA should provide financial support to OGC. The other parts are:

What’s wrong with Oakmont News coverage of the OGC question?

The Oakmont News has been used as a blatant propaganda vehicle for the OGC funding campaign, with no counterpoint or rebuttal to any of the OGC articles:

A definition of propaganda is “information or ideas that are spread by an organized group or government to influence people’s opinions, esp. by not giving all the facts or by secretly emphasizing only one way of looking at the facts.” [1]

In the April 15 issue of the Oakmont News (ON) [2], a front page article by OGC Board member, Gary Smith, entitled “The Oakmont Golf Club and the Oakmont Community”. This article laid out much the same case as did the February 26 OGC presentation, with a mixture of facts and clearly editorial commentary, belittling arguments against OVA support as “I” arguments. Steve Spanier recognized the inappropriateness of this article’s publication and apologized for it at the next OVA Board meeting, but he rejected any printed rebuttal of the article with “two wrongs don’t make a right”. The result is that, for Oakmont residents whose only source of Oakmont news is the paper, and who don’t attend OVA Board meetings, the impression is left that this article was approved as a feature article in the ON, and represents facts.

In every issue, the Oakmont News provides OGC with free advertising and a full page whose purpose is for OGC to be able to announce and promote events which they sponsor. From the April 1 issue until the present, Rick Warfel of the OGC Board has used his regular column 5 times for articles that can only be described as propaganda [3]:

Of the above articles, 1 and 3 repeat the deceptive claim that OVA should share the cost of dredging the golf course ponds because they are somehow essential to flood control. 2 and 4 present rosy views of the future of golf in this country, from articles sponsored by golf industry associations. While not exactly deceptive, they are obviously biased and don’t present counterarguments. Article 5, like the Smith article on April 15, again repeats arguments made during the February 26 meeting, and, again, is a completely one-sided interpretation of the facts. The net result of all of this is that every issue of the Oakmont News from April 1 through June 15 contained an article supporting the OGC campaign for OVA funding. All of these articles meet the definition of propaganda, and the absence of any articles in ON rebutting these claims constitutes a very serious failure to educate Oakmont residents about the OGC question.

Around May 1, I wrote an editorial article entitled “Moving Past Outrage in Oakmont” which advocated making decisions relative to the OGC question based on reality and not on anger, and promoting the June 5 meeting, which I thought would be a more fair meeting than February 26 was. I first offered it to the Oakmont News, because I felt it would be a useful perspective and I wanted to reach all of Oakmont. When, after several days, I received no acknowledgment from ON, I submitted it to the Kenwood Press, which published a slightly abridged version of it on May 15, and I published the full version in the Oakmont Observer [4]. I am not claiming that my writing is great literature or that the ON should print everything they receive, but the topic was very relevant and middle of the road. That ON would not even give it enough credence to acknowledge receipt discouraged me from submitting anything else, because the likelihood that they would accept an article critical of the OGC campaign would be so slim as to be not worth the time to submit it.

In the time since the Board election, there have been no counterpoints to any of the six or more articles authored by OGC Board members, and there have been no articles documenting the decline of golf in this country, or the possible alternative futures for golf courses that close, or anything critical of the OGC party line.

This is a failure of OVA Board leadership, because they are responsible, through the Communications Committee, for ensuring that the Oakmont News is a balanced, factual source of information for the community. It is a violation of the trust placed in them by Oakmont residents who depend on the ON for unbiased coverage of community issues.

What can the OVA Board do to make this right? Direct the Communications Committee to establish the following policies, and monitor the Oakmont News to make sure they are followed:

What can OVA members do to make this right? Again, write, call or Email your OVA Board members (Email addresses may be found at https://oakmontvillage.com/oakmont-residents/govt/board-of-directors/), asking them to correct whatever you see as wrong. Speak out at Open Forum, asking questions that require Board members to go on the record with their answers, and let them, and anyone listening, know what you think. Write letters to the editor for the Oakmont News, and if no such letters are printed, complain to your OVA Board members.

From the perspective of living up to Steve Spanier’s campaign promises of civility, fiscal responsibility, transparency and “free expression of ideas within Oakmont” [5], the events surrounding OGC’s campaign for OVA financial support have been an unmitigated disaster. This makes me very sad, because I think the sort of governance promised in that platform is exactly what Oakmont needs to heal from recent years of partisan conflicts.

But the OVA Board has prioritized OGC support over more pressing OVA needs, has consented to unreasonable OGC demands for secrecy, has allowed the Oakmont News to express only one side of the question, and all indications that are publicly visible are that the Board is determined to provide major 2019 funding to OGC, flagrantly ignoring fiscal responsibility. The OVA Board seems to be working as a committee of the OGC Board, whose responsibility is to find a way to provide the desired support within the law and in such a way that the OVA membership will let them get away with it. Trust in this Board to do the right thing is deservedly waning.

I believe that only aggressive corrective action, following the spirit, if not the letter, of recommendations I have provided, will turn this around so that the Board can gain the respect and trust that Steve has promoted and sought from his election campaign through the present. I appeal to the OVA Board of Directors to take the initiative and do the right thing.

[1] Definition of propaganda from https://dictionary.cambridge.org/us/dictionary/english/propaganda

[3] You can review any of these issues of the Oakmont News from the 2018 News Archive menu at https://oakmontvillage.com/all-updates/

[4] Moving Past Outrage in Oakmont, Bruce Bon, 4 May 2018, https://oakmontobserver.com/moving-past-outrage-in-oakmont/

Share this page:
Posted in Opinion and tagged Oakmont Golf Club, OGC, OGC Subsidy
← Conflict of Interest and the OVA-OGC QuestionOVA-OGC: What’s Wrong With The Process & How To Make It Right — Part 2 What’s wrong with the OVA Board’s response to the OGC appeal? →