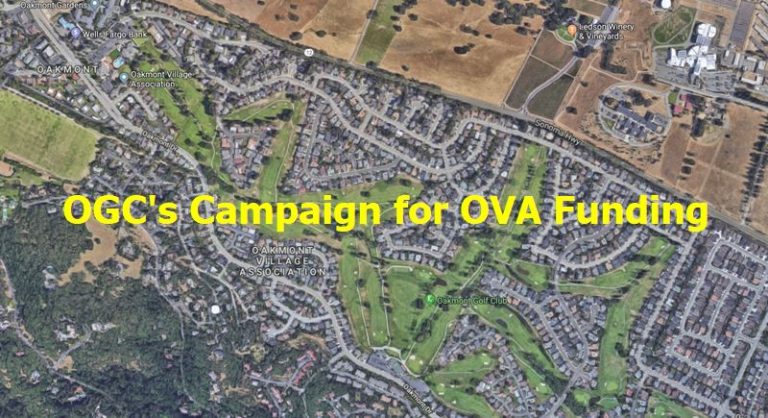 Before I get into the topic, I’d like to make it clear that I am not necessarily opposed to OVA financial support for OGC, if a deliberate and thorough and ethical process is followed, in order to decide how to respond to the OGC request for help. My motivations and timing are explained in Appendix A, for any who care.

Because the OGC property is intertwined with the rest of Oakmont, geography itself determines that any major change in the OGC property will have an impact on most of Oakmont. But it is also true that the question has two sides, and most residents of Oakmont have only been exposed to one side of the story. This 3-part series addresses the process being used to decide what is best for Oakmont, and does not address any particular possible solution or set of solutions. If the process is done right, I believe that resolution arrived at should be at least acceptable, and hopefully the best for Oakmont.

This series of editorials will be my attempt to itemize what is wrong and why I think it is wrong. By wrong, I mean any of: illegal, unethical, unfair or seriously violating the trust that voters have placed in our OVA Board of Directors.  Because I believe it is very poor form to criticize without suggesting ways to correct the situation, I also will provide some possible ways to make it right. Note that the responsibility for fixing this falls on the shoulders of all of us, not just the OVA Board, because, if the OVA Board does not hear from us, they may continue to assume that we who feel that wrongs are being done are merely a slim and unimportant minority of OVA members. If you don’t ask them to mend their ways, they surely will not do so!

The 3 parts of this series will be:

OVA is a non-profit organization whose mission is the maintenance of recreational facilities to serve just over 4,700 Oakmont residents, who are OVA members. OVA’s income is almost entirely made up of the mandatory dues (and sometimes assessments) charged to every resident. OVA’s income from dues, in 2018, is about $3.8 million; our operating budget is about $2.6 million, and about $1.2 million goes into the Asset Replacement Fund and the Capital Improvement Fund.

By contrast, OGC is organized as a for-profit corporation whose mission is to operate 2 golf courses and the Quail Inn, for the benefit of its just under 400 members, about 300 of whom are Oakmont residents. OGC’s gross income comes from memberships, greens fees and the Quail Inn, and they have large and variable operating expenses that offsets this income. Though OGC has refused to let OVA members know any of the key financial numbers, we know that their income is highly variable (unlike OVA’s dues income), because many factors beyond their control affect it: weather, drought, natural events like storms and fires, general economic conditions that affect golfers willingness and ability to pay for the game, and the general decline in popularity of golf over the past 2 decades. Their stated operating budget is about $4 million, around 50% more than OVA’s, and their membership is well under 10% that of OVA. About 6% of OVA members are OGC members.

OGC has had financial stress, off and on, for most of the past two decades. Whether the cause is mismanagement of a member-run organization or simply the declining popularity of golf doesn’t really matter – they have arrived at the place where nothing they have tried has been successful enough to turn the club around, so they decided to seek help from their neighbors (us). OGC members spend much of their time enjoying their sport and socializing, creating what Steve Spanier described recently as a “filter bubble”, a state “of intellectual isolation resulting from the human tendency to seek and consume information that agrees with our viewpoint while ignoring or labelling as ‘fake news’ information that differs from our viewpoint.”[1] Many of the qualities of their appeal to OVA which I find troubling can be traced to their camaraderie in this filter bubble.

Time-share pitch: After a poorly advertised and attended “Town Hall” last fall, OGC got serious with their second “Town Hall”, which had an overflow crowd at East Rec in February. Barbara Robinson used a PowerPoint presentation [2], with beautiful pictures of the golf course, exaggerated claims of the “free ride” that Oakmont residents have been receiving for years for the golf course views, fire breaks, presence of the Quail Inn and storm drainage, but with no financial numbers that might show why they are making the appeal. Although it was claimed to be a joint OVA-OGC event, the show was entirely run by OGC and there was no mention at all of any downside to their “illustrative example” of $5/mo/OVA member as a suggested level of support.

Deception: Regardless of the merit or lack of merit of OGC’s claim that they have been burdened by having to maintain a system through which much of Oakmont’s storm water drains, the only expense numbers that have been publicly quote are for dredging golf course ponds, and these quotes were in the context of Rick Warfel articles about the storm drainage system, clearly implying that the ponds are an essential (and expensive) part of that system. While it is true that the water infrastructure within the OGC property is all interconnected, serving the purposes of irrigation, drainage and maintaining golf course ponds (aka water hazards) [3], by no stretch of anyone’s imagination can the ponds be considered an essential part of the storm drainage system. They exist for golf course purposes and only for golf course purposes, and to claim otherwise is outrageously deceptive.

OGC unwillingness to provide OVA membership with financial information essential to judge the reasonableness and urgency of their request: Around a week or so before the February “Town Hall” meeting, I sent the set of questions shown in Appendix B to Barbara Robinson, asking that she address them in the meeting. She did not even acknowledge my request, much less answer the questions. When I suggested a format for the June 5 meeting, Steve Spanier sought approval from OGC before proceeding, and apparently agreed to the OGC demand that financial questions would not be answered and that they didn’t have to answer any questions they chose not to answer. Not only did I intend for any and all questions to be fair game, but I intended for a moderator to ask the questions individually, forcing OGC representatives to either answer or to go on record saying “we won’t answer that”. No financial questions were permitted, and the moderator didn’t moderate, thus allowing OGC once again to completely control the narrative. This completely subverted my desire to force some degree of transparency on OGC. I only found out about the changes when Steve’s Setting Expectations announcement came out on June 4 [4], and I immediately reacted by publishing an editorial in the Oakmont Observer condemning the preferential treatment given to OGC that allowed them to withhold information [5]. Some of the same complaints and recommendations for remedy that you will see in this editorial series were first mentioned in that editorial.

OGC unwillingness to sacrifice anything of value for the millions of dollars they ask in assistance: For the June 5 event, OGC was presented with a set of proposals submitted by Oakmont residents [6]. I do not have a list of the set to which they responded negatively, but I was there and any proposal which suggested that OGC trade something of equivalent value for the $1.4 million that they hope for in the first 5 years, was treated as a “non-starter”. The suggestions to which they responded favorably (see [6], p. 5) are worth only a tiny fraction of that amount.

OGC, contrary to claims, is asking for a hand-out: Given that they have offered no possibility of any OGC property or service of comparable value to the $1.4 million that they want OVA to commit over a 5-year period, their request for that much funding can only be characterized as a request for a handout from the 4,700 OVA members. The claim that, by their mere existence as our neighbor, they are providing an immense value to the community, is as ridiculous as if it were to be made by the winery across the street, or by the state for providing us with the fabulous amenity of Trione-Annadel State Park.

What could the OGC Board do to make this right?

What could the OVA Board do to make this right? This is simple and obvious. Refuse to consider any request for financial cooperation from OGC until they allow (they must give permission, since OVA Board members have signed non-disclosure agreements to be able to view OGC financials) the OVA Board to provide a financial summary to all OVA members that will at least answer the financial questions in Appendix B of this article. This is probably not a complete list of questions that should be answered, but it would at least be a start.

And get over the prejudice that OGC must survive, no matter what. Granted that OGC failure would present major challenges to OVA, but propping them up with our dues or assessments is unlikely to save them in the long term, and ignoring your due diligence to give them support on their terms is unwise and illegal.

Beyond that, actions to make it right will be covered in the next section.

What can OVA members do to make this right? Write, call or Email your OVA Board members (Email addresses may be found at https://oakmontvillage.com/oakmont-residents/govt/board-of-directors/), asking them to correct whatever you see as wrong. Speak out at Open Forum, asking questions that require Board members to go on the record with their answers, and let them, and anyone listening, know what you think. If you are an OGC member, and you feel that these criticisms are valid, then let your OGC Board members know that you want them to do better.

The next article in this series will cover What’s wrong with the OVA Board’s response to the OGC appeal?

[5] An Open Letter to Steve Spanier – You Are Failing on the OGC Issue, Bruce Bon, 5 June 2018, https://oakmontobserver.com/an-open-letter-to-steve-spanier-you-are-failing-on-the-ogc-issue/

APPENDIX A: My motivations and timing

I am not a natural activist – I don’t find it fun or enjoyable, and I’m much more inclined to be a loner than an organizer. But I have recently been motivated to comment regularly and publish occasionally, because I feel very strongly that the Oakmont Golf Club (OGC) campaign for financial support/cooperation from the Oakmont Village Association (OVA), and the OVA Board’s response to it, are terribly wrong in many ways.

Timing of this editorial series: It is just two days before yet another town hall meeting, at which the OVA Board promises to give us a progress report. It is possible that the event may reveal that some of the process issues I address herein have been resolved, but I have no reason whatsoever to think so. If I waited until after that meeting, there would probably not be time for any Board member who takes these criticisms seriously to propose agenda items addressing any of them. It will help, of course, if any of you who have the same concerns as I, communicate to one or all Board members (respectfully, please), as promptly as possible.

APPENDIX B: Questions sent to Barbara Robinson prior to the February “Town Hall” meeting

Share this page:
Posted in Opinion and tagged Oakmont Golf Club, OGC, OGC Subsidy
← OVA-OGC: What’s Wrong With The Process & How To Make It Right — Part 2 What’s wrong with the OVA Board’s response to the OGC appeal?The July 10 Town Hall on the Golf Courses and OGC →