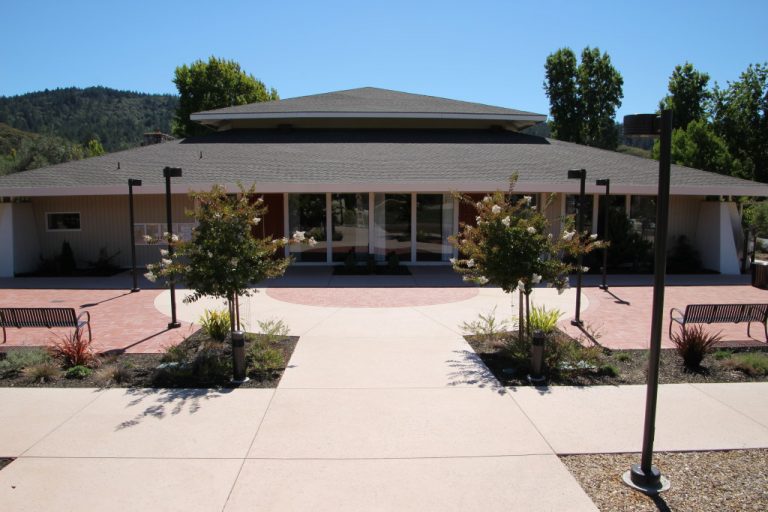 More than half a century ago, H.N. “Nor” Berger, a developer from Sacramento, built 600 houses and an 18 hole golf course along Highway 12 – in a former hop yard. He fulfilled his dream to create a retirement village that followed a new trend sweeping the nation.

The entrepreneur built out his Shangri-La with single homes, two- tri- and four plexes and thus encouraged an interesting demographic mix, encompassing people from different walks of life and financial means.

Although adding a second golf course, Oakmont nevertheless displayed a solid middle class complexion, which it retained for some 55 years. By dint of the original plans, the community was never gated and its streets remain public.

But then something happened: The wine industry reached across the Mayacamas from the Napa Valley and the sleepy Sonoma Valley became a favorite destinations of wine loving visitors. Its beautiful scenery of mountains and forests only added to the attraction.

Oakmont Village, surrounded by vineyards and parks, was discovered. More often than not, young people in their fifties joined septuagenarians and octogenarians who had lived here for many years in their relatively modest mid-century modern style homes.

The new arrivals went about changing the interiors, in some cases the exteriors of the houses, as well. Selling property in the pricey Bay Area allowed them to buy here at reasonable rates and then spend a significant amount in remodeling their new abodes.

The neighbors did not object because it did not affect them directly. But that pleasant existence started to take on another dimensions when it became time to rehabilitate Oakmont’s infrastructure; its recreation halls, centers and pools. Aging in like manner to the private homes, the rejuvenation had to be paid for with increased dues assessed to every resident.

For years these monthly expenditures were kept low, but in recent times they almost doubled and tripled in cost, creating a financial burden for many elderly neighbors, who live longer, but whose savings dwindle month by month.

So acute was the emerging reality that the Wall Street Journal dispatched a journalist to report on the crisis of income disparity in our village. We became famous in the pages of one of the nation’s most respected publications.

As if the pressures were not enough, another strain surfaced. The two iconic golf courses, meandering through the neighborhoods, were struggling for their survival. An intrinsic element of Oakmont as a “golfing” community was facing critical cash flow problems. The governing body of the respective group, the Oakmont Golf Club, asked to be  supported by the Oakmont Village Association.

And these events bring us to the present. Negotiations have been and continue being conducted. To date the OVA tacitly agreed to buy a piece of land from the OGC and to pay for water management. (Decisions that have sparked opposition based on a piece meal approach to a serious problem.) A special committee to assist the board with the issue has been formed most recently by the OVA.

The East Recreation Center almost finished; a $3 million project that needs to be absorbed in our budget and reserves, has placed the Berger Center and its planned remodel on the back burner. The same holds true for the CAC and the Central Pool, long in need of attention.

Oakmont is stayed at an inflection point, uncertain about the realities and costs of tomorrow, but compelled to manage its destiny against all the unknowns and variables it encounters at this moment in time.

Candidates campaigning for board election this spring will need to formulate creative answers to the numerous and complex challenges facing our Association. Facile or non-committal comments will not assure a constituency looking for timely and satisfactory resolutions to a myriad of issues.