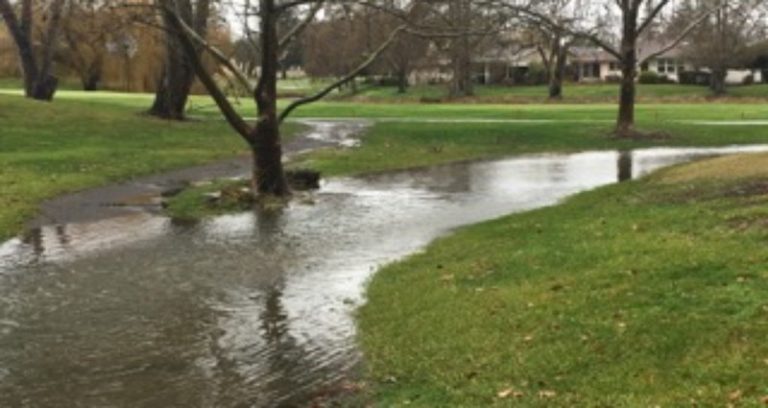 Although the OVA Board has expressed an interest for several months in allocating OVA funds to the OGC for unspecified drainage and flooding concerns, the first sign of concrete action on this issue was displayed in the Board’s Executive Meeting Minutes from 12/18/18:  “The Board approved the offer to reimburse OGC $20,000 to drain three occluded main surface drainage ditches.”

The Board had stated that it will keep the community apprised of its decision-making process.  Yet there was no discussion or vote during the Board’s December open meeting and members only became aware of this approval a month after it had taken place.

Director Tom Kendrick, the Board’s designee on the OGC issue and a member of the newly formed Oakmont Golf Club Committee, then stated at the 1/15/19 board meeting (at which the above minutes were approved by the Board):  “(The OGC Committee) discussed the status of helping with some of the clearing of drainage streams that run through the golf course but do threaten OVA homeowners’ properties.” (emphasis added)  He later remarked, “first we are looking to make sure that what’s going to be done relative to any sort of maintenance work, keeping the flow in the drainage streams clear, does in fact have a material impact on our members’ properties.”

So which is it?  Before the $20,000 funding was approved in executive session, the board or its designated committee should have verified that said work and funding “does in fact have a material impact on our members’ properties.”

“We have maps, indicating the properties that are threatened by inadequate maintenance of the drainage streams that flow through our village.” – Director Kendrick

Let’s be honest.  Is this really about cleaning out drainage channels or is it about finding a way to subsidize OGC?

Over the course of the past year, the Oakmont Observer has attempted to bring clarity to OVA’s concerns that Oakmont homes are in potential danger of flooding.  (See link1, link2, link3)

When recently asked to identify the drainage streams in question, Director Kendrick replied: “We have maps, indicating the properties that are threatened by inadequate maintenance of the drainage streams that flow through our village. I concur that it would be a good idea to publish this information, and we plan to do so before the work commences.”  This lack of, or delayed, transparency on the issue is troubling. Numerous inquiries have been made as to the location(s) of the board’s area of concern for flooding with as yet no information provided to the Oakmont Observer or OVA members.

The only area that Kendrick specified in his recent reply was “a number of the properties on Mockingbird Circle.” So let’s start there.  Below is an overview of the Mockingbird Circle area.  The drainage swale between the homes and the driving range at the lower portion of the top photo is shown at ground level in the other two photos. The two ground level photos were taken just after the recent torrential rains.  The drainage swales appear to be performing as designed, with water being directed to the creeks on the bottom left and right, as shown by yellow arrows in the overview photo. 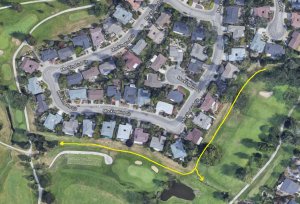 Overview with flow of drainage 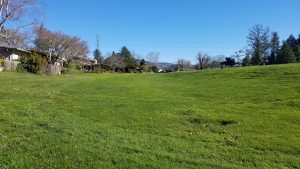 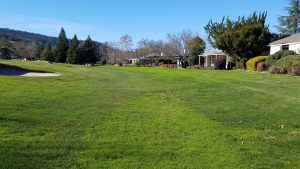 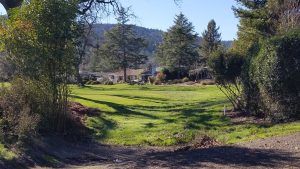 OGC first raised the issue of flood control at their November 2017 Town Hall presentation and again at the February 2018 Town Hall, showing a photo of storm drainage across the east course near the club house and Twin Lakes Circle.  This is a normal drainage route, part of the golf course design to drain into one of the lakes before heading east under Oakmont Drive and the continuation of Sonoma Creek. 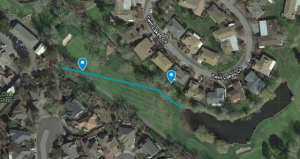 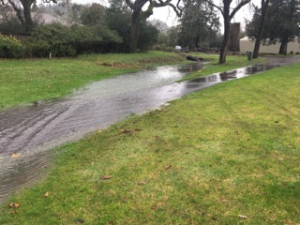 Requests to OVA, OGC and OVA residents have produced no photos or evidence of flooding of homes anywhere in Oakmont.  A recent lengthy discussion on Nextdoor after heavy rains in early January did not include a single example of home flooding due to overflow from golf course creeks or ponds. More than 10 inches of rain has fallen on Oakmont in January with 5-6 inches in the torrential rains ending on January 20th, “one of the largest storms of the winter season,” according to the Press Democrat.

The following pictures were taken after the heaviest downpours the week of January 14-20. 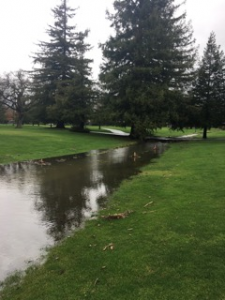 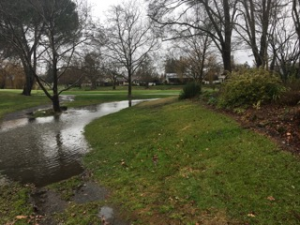 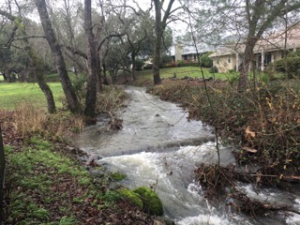 Near Singing Brooks and Oakmont Drive

If you live in any of these areas and have experiences to share, please post a comment to this article. Below are some comments made to the Observer by residents adjacent to the golf courses.

An Oak Island HOA resident (where the golf course borders three sides of the association) told us that  “flooding into homes is not a current problem that I am aware of.”

The President of the Laurel Leaf HOA, which borders the 3rd hole of the West Course and is near the overflow of Charlotte Creek pictured above, told us “there are no concerns of flooding.”

A Twin Lakes resident commented that “in 18 years that I lived here, there has never been a concern of flooding.”

Another said, “I have lived adjacent to the East Golf Course for 17 years. During this time we have on occasion experienced heavy rains, but never flooding of mine or my neighbors’ homes. A swale carries water efficiently from one pond to the other on Twin Lakes, and water flows across the golf course into one of the waterways.”

One final point:  A letter that appeared in the Oakmont News on 8/15/18 is again worthy of consideration.

“Only about 25% of the storm runoff from the Oakmont home area drains to Oakmont Creek while the creek is within the golf course. I’ve provided the Board with the city map which makes this clear but feel all of Oakmont needs to understand those facts as well.  From approximately Woodley east to the Mt. Hood Circle area storm water drains to the creek which exits east and into Sonoma creek, not Oakmont Creek. Oakmont Creek exits under Oakmont Dr. by the open space on Oakmont Dr. that was proposed as a possible dog park. The area west (Stone Bridge, etc.) only enters the creek after the water is no longer a problem for the course. This would include all of the west end, the Pines, the newer homes behind the Gardens, White Oak Dr., the CAC, etc. The Annadel side of Oakmont Dr. from Cliffwood down the hill also enters the creek only after it exits the golf course.”  Andy Baldwin, Oakmont

According to Mr. Baldwin, the streets and homes that drain directly into the golf courses include the very homes that line the golf courses and which also directly benefit from open space views and green manicured fairways and greens.  And still no evidence has yet been presented by the OVA Board that any of these homeowners face a threat of flooding from the golf course.  The recent torrential rains have again demonstrated the efficacy of the golf course drainage design.

Now that our money is on the table it’s time for the OVA Board to lay their cards on the table and release factual information of any homes in Oakmont they contend are threatened by flooding from the golf courses.