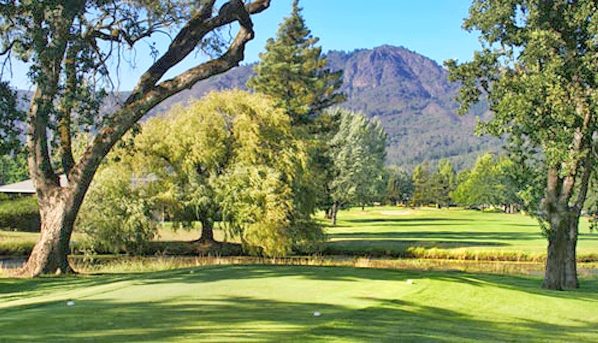 To continue our exploration of the drainage issues raised by the Oakmont Golf Club (OGC), we should cover a few topics that were not addressed in the previous article.

It should be noted that OVA Board Vice President Tom Kendrick (and board designee on the golf course issue) made several comments at the July 10 Town Hall indicating that he is receptive to OGC’s position that OVA cost sharing with OGC on the water drainage issue is a matter of fairness and responsibility. OGC has promoted this argument continuously over the past year at town halls and in the OVA’s own corporate newsletter, the Oakmont News. This warrants further exploration.

For more than 50 years California drainage law has followed the principle of the “civil law rule,” which contains the following relevant language:

“The civil law rule, or natural flow rule, places a natural easement or servitude upon the lower land for the drainage of surface water in its natural course, and the natural flow of the water cannot be obstructed by the servient owner to the detriment of the dominant owner.”  Waters and Water Rights, §§452.2A (R.E.Clark ed. 1972)

This principle turns the OGC argument on its head.  OGC (the downstream or “servient owner”) has made the claim that OVA (the upstream or “dominant owner”) owes them the servitude or responsibility of assisting OGC in maintaining the natural and manmade drainage features throughout the golf courses. However, under the general principles of drainage law, it is clear that the downstream or lower landholder has the responsibility to the upstream landholders of maintaining the natural flow of water without obstruction that may be “to the detriment of the dominant (upstream) owner.”

It is OGC’s sole responsibility to keep the creeks and ponds free of clogging vegetative growth and unobstructed in flow.

In their own Powerpoint presentation at the July 10, 2018 town hall they included the following language in a slide on “California Drainage Law”:  “The downstream property owner is obligated to accept and make provisions for those waters that are the natural flow from the land above.”

Imagine if the Oakmont Golf Courses had been built without the surrounding homes.  All the drainage that existed for thousands of years from the surrounding hills and mountains into the valley would still exist and flow through the golf courses.  Further, the golf courses were originally designed to take advantage of the runoff into Santa Rosa Creek (later renamed Oakmont Creek where it passes through Oakmont) and Sonoma Creek and their various tributaries to create visual water features and storage ponds.

Now add the houses and streets and ask yourself how much additional runoff is created.  OGC claims that the residential neighborhoods are also partly responsible for additional silt clogging the creeks and ponds.  However, rain falling on pavement and hardscape (as opposed to earthen hillsides and fields) reduces the amount of soils that erode into the creeks and water courses of the golf course. Again, from the OGC Powerpoint presentation at the July 10 meeting:

Most drainage disputes between landowners arise when a new development creates problems for an existing development.  Since the Oakmont residential component and the golf courses were built at the same time under a master plan it is highly unlikely (and there is no evidence) that runoff was diverted from its natural course.  In fact, as reported in my previous article (link), drainage of the residential and golf course areas was actually designed to maximize water retention and storage for golf course irrigation. 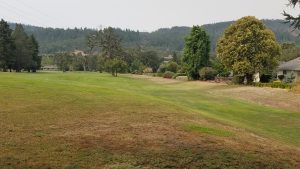 In designing the golf course, drainage swales were added along the sides of the fairways and greens to collect storm drainage on the course itself and from the surrounding neighborhoods. Subsurface drainage pipes collect the water as it filters down and directs it to the creeks for storage and/or drainage along the existing natural system of drainage to the Russian River via Oakmont/Santa Rosa Creeks or to San Francisco Bay via Sonoma Creek. 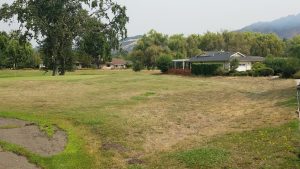 Pythian Drive is the highpoint, the”continental divide” as it were, and all water flows east to Sonoma Creek from this point or west through Oakmont Creek, into Santa Rosa Creek along Channel Drive and on through the city into the Russian River.

Stormwater harvesting and management may become increasingly important to OGC with the proposed limits on groundwater tapping that are taking shape.  Pumping of groundwater through wells was largely unregulated until 2014 when the state legislature passed the Sustainable Groundwater Management Act (SGMA).   Sonoma County is in the process of implementing the state law via three separate agencies in the Santa Rosa Plain, Petaluma Valley and Sonoma Valley.  But this part of the discussion is best left to another time.

Share this page:
Posted in News and tagged Oakmont Golf Club, OGC, OGC Subsidy
← In a NutshellA Home Is Not A House →