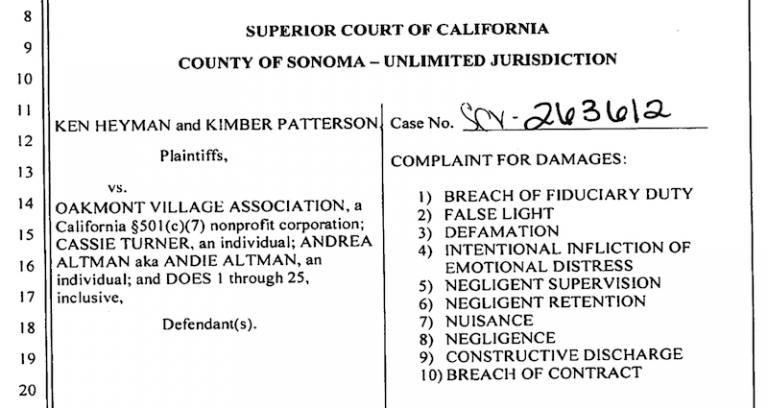 The Complaint for Damages filed with the Sonoma County Superior Court in this matter is a public document that was obtained from the Court.

The Complaint names former OVA Manager Cassie Turner, former Board Director and President Andie Altman and 25 unnamed individuals as Defendants.  (“Plaintiff will amend this complaint to add their true names and capacities when the same are ascertained.”)

“Plaintiff is informed and believes and thereon alleges that Turner, Altman, and certain members of the Association and its Board of Directors (the “Board”) fraudulently concealed the basis of Plaintiff’s causes of action and that Heyman, starting in December 2017, discovered as part of his tasked review of Turner’s OVA emails in defending OVA against Turner’s employment claim and settlement demand.”

The Complaint also states that “the Association has ignored Plaintiff’s diligent attempts to mediate this dispute prior to filing this Complaint.”

“In 2016, the Board created a ‘poison pill’ employment contract for Turner against the advice of OVA counsel and without their knowledge for the express purpose that future Boards would not be able to terminate her employment as OVA Manager without severe recourse, including but not limited to a ‘golden parachute.’

“On April 4, 2017, Plaintiff Heyman, Carolyn Bettencourt, Greg Goodwin, and Frank Batchelor won Board seats. 2016 Board member Ellen Leznik was elected President of the 2017 Board; Heyman was elected VP. Defendant Andrea Altman aka Andie Altman (“Altman”) and Gloria Young remained on the Board for their second year.

“In December 2017/January 2018, Heyman discovered a May 2017 email from Turner to (Terri) Somers exclaiming ‘the cat’s out of the bag.’ Plaintiff is informed and believes and thereon alleges that Turner had no legal documentation to support the payments to Somers/TLS Events (i.e., W-9, proof of insurance, vendor contracts, etc.), that Turner sent this email to Somers in response to Heyman’s discovery of the suspect payments to ‘TLS Events’ and that in retaliation for exposing the suspicious payments, Somers soon began using social media – Nextdoor and Facebook (Oakmont Buzz) – to write overt lies and slanderous posts to deliberately harm Heyman and his reputation. She often removed the posts once damage was done.

“On June 19, 2017, on the advice of counsel, the 2017 Board hired Scott Wilmore to investigate the inception of Turner’s October 28, 2016 ‘Management Agreement’ employment contract with OVA and interview the 2016 Board members. Altman refused to be interviewed. Wilmore’s investigation reports and findings supported the OVA attorney (for 40 years) Malcolm Manwell’s allegation, that against OVA’s best interests, Turner and her friend of 25 years, attorney Sandra Gottlieb, ‘cooked’ the contract with terms favorable to Turner. Plaintiff is informed and believes and thereon alleges that Gottlieb, a self-described expert in HOA law, drafted the cooked Turner/OVA employment contract while at the same time serving as counsel to the OVA.

“Plaintiff is informed and believes and thereon alleges that Turner engaged in misconduct, including malicious, defamatory attacks on Heyman both before and after his election to the Board, to ensure that her “cooked” contract would not come under scrutiny in 2017.

“Plaintiff is informed and believes and thereon alleges, that Turner’s self-dealing with respect to her contract constituted a conflict of interest, and that she took certain actions to: (1) ensure that a ‘friendly’ Board would honor her ‘cooked’ contract; or (2) enable her to blame an unfriendly Board for forcing her to resign. 2016 Board member Andie Altman was highly exposed and faced personally liability for her complicity that resulted in the execution of Turner’s ‘poison pill’ contract, as did Board member Frank Batchelor who also signed it against the advice of OVA counsel.

“On July 14, 2017, the Editorial Team of the Oakmont News used the internal OVA house organs to publicize Turner’s disgruntled allegations concerning the 2017 Board and her resignation as OVA’s Manager. Later that day, for reasons unknown, the Santa Rosa Press Democrat published a story of Turner’s resignation as OVA’s Manager citing ‘difficulties’ with the new Board. Turner is the only person quoted in the story.

“Between July 18-21, Heyman, consistent with OVA’s written policy, exercised his fiduciary duty (duty of loyalty) to the OVA, by advising the Editorial Team and Communication’s Committee (‘CC’) to stop any further publications regarding OVA personnel or Turner as it is a destructive act against the OVA.

“On July 18 and July 19, 2017, the CC retaliated against Heyman by publishing defamatory statements on various social media sites stating that Heyman was censoring the CC.

“On July 21, 2017, Turner emailed the Board, stating that her email had been ‘hacked.’ Within 30 minutes, Turner sent an email to an OVA member suggesting that Heyman was involved in hacking Turner’s computer. Investigation by an outside consultant revealed that Turner had deleted her emails and intentionally lied to residents and the Board to defame Heyman.

“Plaintiff is informed and believes and thereon alleges that Turner deleted her emails in an attempt to cover her tracks and protect others who colluded with her.

“On July 23, 2017, OVA Communications and Editorial Team member Marty Thompson used his former position with the Associated Press to have an article regarding Heyman’s alleged part in the censorship written and published in AdWeek intending to deliberately harm Heyman’s name, reputation, and business.

“On July 25, 2017, Ellen Leznik resigned from the Board, and Heyman was elected OVA President.

“On July 27, 2018, unbeknownst to Turner, but in response to her allegation that she had been ‘hacked,’ OVA hired Digital Mountain to conduct a security audit of Turner’s computer to determine whether, in fact, any security breach or hacking occurred.

“On July 28, 2017, Turner’s attorney sent a Demand Letter to OVA seeking $300,000 in damages and alleging she was subjected to ‘intolerable mistreatment’ by the 2017 Board. Plaintiff is informed and believes and thereon alleges that Turner made this false allegation as part of her scheme to defraud the OVA by seeking to enforce the golden parachute provision in her “poison pill” contract that Altman and the 2016 Board approved and executed.

“On August 3, 2017, still unbeknownst to Turner, Pete Smith of Digital Mountain completed the security audit triggered by Turner’s ‘hacking’ accusation and told 2017 Board President Heyman that ‘This is a classic case of ‘self-sabotage’ by a disgruntled employee. She was setting you up.’ Plaintiff is informed and believes and thereon alleges that Turner deleted her own emails to hide misconduct from the Board, the Association, and third parties, and blame Heyman to further her efforts to have him removed from the Board and cause additional harm his reputation.

“On August 5, 2017, at an Emergency Executive Session, OVA attorney Malcolm Manwell revealed that the 2016 Board president, Andie Altman, had requested the ‘cooked’/’poison pill’ contract be drafted for Turner’s employment to prevent or serve as a disincentive for any incoming Board to terminate Turner’s employment contract.  Paragraph 9.B of Turner’s contract reflects why counsel advised OVA not to sign it, since it provides Turner with a ‘golden parachute’ that goes against the Association’s best interests. Among other suspect provisions, the Turner Management Agreement provides:

“On or about the weekend of August 11-13, 2017, Turner and her husband Dave Turner moved out of their rental home in OVA.

“On August 12, 2017, Heyman discovered a paper bag outside his front door with ‘You Next’ written on it. Inside was the severed head of a rat. Heyman immediately contacted the Santa Rosa Police Department. Officer Mark Martin arrived, considered this a viable death threat, took the bag for evidence, and opened Case Number 17-10568. A $12,000 reward was offered.

“On August 15, 2017, in an Emergency Meeting, Heyman stepped down as OVA President but remained on the Board. The next day, Batchelor, who signed the Turner ‘poison pill’ contract, resigned from the Board without explanation.

“In November 2017, the OVA’s insurance counsel Mark Posner asked Heyman, along with other Board members President Gloria Young and Director Carolyn Bettencourt, to research Turner’s deleted emails for evidence of her collusion regarding her contract.

“In December 2017, Heyman began spending countless hours reviewing Turner’s deleted emails and slowly discovers that while serving as the OVA Manager, Turner had abused her position by colluding with others to harass Plaintiff, and tell falsehoods and disparage Heyman and Patterson to other Association members and agents without their knowledge.

“Plaintiff is informed and believes and thereon alleges that Turner breached her fiduciary duties by conspiring to defeat the 2017 Board in an attempt to protect her ‘poison pill’ contract.

“On January 26, 2018, due to concerns for the health and safety of himself and of his family, Heyman resigned from the Board.

“On February 15, 2018 OVA members, then current Tennis Club President Terri Somers and former Board President John Felton posted messages on Facebook specifically to elicit anger and mistrust of Heyman insinuating that he should return the security camera posted at his front door, and Felton suggested that there had never been a rat head and that Heyman invented the rat head incident.

“On February 16, 2018, Heyman sent a letter to current OVA Manager Kevin Hubred and OVA’s then counsel Martin Hirsch expressing grave concern about the continued hostility toward him. Heyman received no response to his complaint and concerns for his safety.

“In May 2018, Heyman and Patterson fled OVA and abandoned their dream retirement home on which they had spent over $200,000 to remodel due to the continued hostility from the OVA community.”