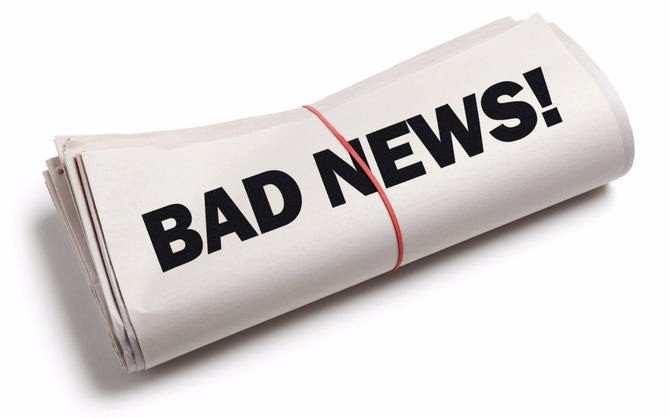 This is not the proverbial good news, bad news story. There is no good news here. This is dreadful news.

By buying-in entirely to the vision sold by AGP – a vision of being able to continue to operate two golf courses and a restaurant (maybe two) with such a significant revenue increase from the food and beverage business that the golf courses might ultimately break even in 5-7 or at worst 10 years – OVA made itself completely dependent on AGP going into the lease negotiations. Other potential vendors, including apparently the current two prospects, were already rejected. That gave AGP an enormous bargaining advantage in the lease negotiation and they took it – nothing personal, strictly business – and jilted us at the altar, walking away from the deal.

OVA then returned to the other vendors, rejected them a second time, and signed a less favorable deal with AGP, believing AGP a better lease partner than the competing vendors could be. It appears that the security of that deal was quite weak. Whatever its internal measures and payoffs were, the strength of any deal depends on the degree of commitment to it by each party. The core measurement of that commitment is the ease or difficulty of either party’s terminating the lease. It appears that we signed a deal for a 20 year lease instead of the original 30 years that had an easy exit at least for AGP, that is, a deal to which the party on which OVA had made itself completely dependent had, ultimately, a very weak commitment. Obviously this was done knowingly. To be fair, at that point, what choice did we have? Still, nothing personal, strictly business for AGP, they have jilted us again just months in.

OVA now intends to return a third time to the twice-rejected other vendors and, if continuing with them to pursue the vision AGP sold, stands before them, too, totally dependent. Naked. To find good news in this state of affairs because two twice-rejected suitors are willing to compete for our hand a third time, knowing that we are in desperate need of one or the other, is magical thinking.

But put aside whether you agree or disagree with that analysis of how we got here and where we actually are. If ever there was a time to look at the whole concept afresh, that moment is now, instead of barreling forward to engage another vendor in the vision of “success” that AGP sold us, a vision which its abrupt pullout demonstrates, at least to some degree if not fundamentally, is economically flawed.

I’ll suggest one reason why it’s flawed and further suggest that the reason is obvious. Although the Board has never fully explicated publicly the economic assumptions of the AGP deal, from the outset there were skeptics, conceptually, about whether the food and beverage operations could advance so spectacularly that the golf courses operation could break even – or even the entire operation become profitable – in some period like 5-7 years. And others honestly and fervently have believed that they could.

But now Covid19. Yes, nobody anticipated it, not AGP, not OVA, not Oakmont residents.

Nevertheless, the fact is that the world has changed.

Is it now rational to go forward trying to engage another vendor to buy into the AGP vision of sustainably operating two golf courses on the back of dramatically increased revenue from a restaurant?

I suggest that the Board needs to take advantage of this situation not by barreling forward into another long-term lease commitment in the next 30-60 days but instead by re-examining objectively whether the vision is achievable.

This is not about a binary choice of having golf or not having golf in Oakmont. A number of times now, most recently today, President Spanier has asserted that the primary reason for buying the Oakmont Golf Club was not to guarantee the operation of two golf courses but to secure the land from hostile interests:

“. . .it’s important to remember that the main reason we purchased the golf club was to keep the land in our own hands for all time. Owning this land offers Oakmont infinite land use choices . . ..”

I would propose that the Board NOT in the next few days enter into a 30-60 day management contract with CourseCo, as announced, but that it negotiate with CourseCo a longer term management contract – a year, a year and a half, two years. The Board should use that time objectively and freshly to assess our situation, figure out what the membership of OVA wants, and then reach a reasoned economic assessment and conclusion about what is the optimal of the infinite land use choices for Oakmont in these times and looking toward future times as best it can be discerned.

Only then will it be the right time to articulate a vision, search for the best vendor(s) or lease partner(s) to carry it out, and negotiate a strong, secure long-term arrangement in Oakmont’s best interests.

Share this page:
Posted in Opinion
← An Open Letter to the OVA BODGolf Course Lease “Partner” Abruptly Leaves the Building. What Now? →