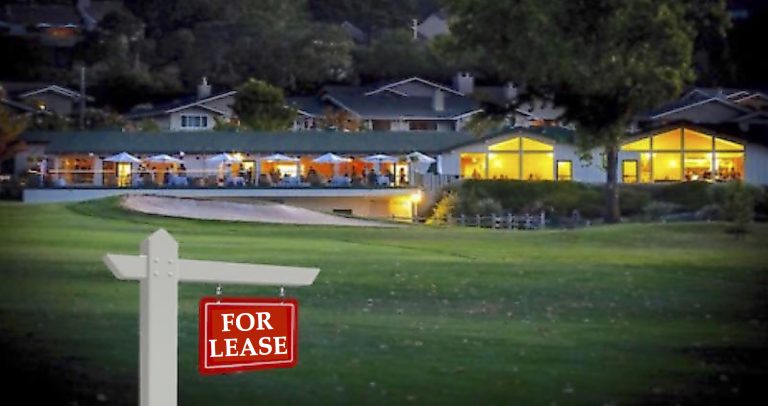 Advance Golf Partners (AGP) informed the OVA Board and management that they are terminating the lease agreement signed in February. In other words, according to the language in the agreement, they defaulted on the lease agreement. They take this action just five months after the agreement was signed. Prior to signing, the agreement had to be renegotiated when AGP reneged on their original commitment to invest $1 million of their money into capital improvements for the golf courses, the two clubhouses, bar and restaurant.

In light of this shocking and unforeseen development, a bombshell dropped into the middle of our community as we deal with a worldwide pandemic and a nearby semi-permanent homeless facility, it might be a good time to revisit some of the things OVA members were told last year when the golf course purchase was still under discussion.

Ken Arimitsu, OVA’s broker for the purchase of the golf course (whose firm Madison Marquette was paid a $72,000 commission), said that AGP was asked to provide a five year capital plan on what it would take to get the golf course up to an acceptable standard. They came up with a budget of $3.5 million dollars over five years (with $1.5 million in the first 18 months) “to get the golf course to the point where it was sustainable.” “The absolute net lease form basically says that you sign a lease with a tenant over, let’s say, a 30 year period whereby they are fully responsible for the golf course, upkeep, maintenance, and there is some rent due,” said Arimitsu. “And the concept we talked about is $1 million dollars upfront that they would pay to the OVA to offset the immediate deferred maintenance. And AGP committed to contributing $1 million of their own money. The remainder was to come from OVA member dues.”

This was incorrectly reported by Al Haggerty in the Oakmont News (“Lease Partner to Invest $3.5 Million If OVA Buys Golf Course”), which was mailed to every OVA member and which appeared in the Friday E-blast during the period prior to the election vote. This bit of misinformation was never retracted or corrected by either the Oakmont News, the Board of Directors or OVA management.

“The deal at the end of the day has to be economic. If it reaches a certain point of unprofitability for the community and the costs far outweigh the benefits then it breaks,” said Arimitsu at the 6/25/19 BOD meeting.

According to a letter from AGP President Larry Galloway that was read at 7/2/19 Town Hall/Workshop: “We intend to start with a million dollars in capital improvements. Each year Advance Golf intends to spend approximately $500,000 more than is currently being spent by the current owners and operators. The $500,000 a year expense breaks out approximately as follows: $60,000 more per year in equipment leases, $200,000 more on golf course maintenance, $100,000 a year in capital repair and replacement, $140,000 more per year in improved food and beverage and clubhouse staffing, hours of operation and services.”

“This is kind of a unique situation in that you have somebody willing to come in, stepping up and kind of doing a triple net lease on the property, an absolute net lease.” Ken Arimitsu, 7/2/19

“In the field of commercial real estate, especially in the United States, a net lease requires the tenant to pay, in addition to rent, some or all of the property expenses that normally would be paid by the property owner (known as the “landlord” or “lessor”). These include expenses such as property taxes, insurance, maintenance, repair, and operations, utilities, and other items. These expenses are often categorized into  the “three nets”: property taxes, insurance, and maintenance. In US parlance, a lease where all three of these expenses are paid by the tenant is known as a triple net lease, NNN Lease, or triple-N for short and sometimes written NNN.” (Wikipedia)

VP Tom Kendrick said that getting a lease partner “lowers the risk, the uncertainty becomes much less, and there is some potential for net income.” “The lease partner takes most of the risk,” said Steve Spanier at the 7/2/19 Town Hall. Arimitsu said, “in creating a net lease structure you bring in a partner that is a professional operator and you shift most of the risk to that operator, I think that’s the structure that the OVA board is looking for and has kind of employed me to try to help negotiate.”

Nice sentiments and hopeful talk at the time but the risk and uncertainty have now skyrocketed.

With the insight of time, we can see now that AGP reneged on the $1 million investment before ever signing the lease agreement and the question arises whether they had any intention of investing their own money in this project. Galloway’s letter (quoted above) to OVA members used the language “Each year Advance Golf intends to spend…”  Though this statement makes it appear that they were intending to spend their money, this was likely a reference to spending OVA members’ dues money.

Well, as far as we can tell, there is no reserve fund since it was to be contributed to by AGP at the end of each calendar year with 3% of gross revenues. All OVA members can hope is that we get back most of the money we sent to AGP to perform capital improvements on the property.

And let’s not forget this gem: “Don’t believe anything unless it comes from us. We will give you the truth.” (Spanier at 6/18/19 BOD meeting)

In a short article titled “Golf Progress” in the current July 15 issue of the Oakmont News, Spanier says, “I’m impressed by AGP’s spirit, dedication to excellence and expertise. If we can be patient and let them do their jobs, I think that over time we’ll see very good things. They want to be more than a golf operator; they want to be valued members of the community.”

The recent President’s Message informed us that over the next 60 days the Board intends to negotiate a new lease agreement with another operator. Wouldn’t it be best to pause and get community input prior to heading down the same path that led to the current situation? The Board’s track record on this matter is not one that inspires confidence.

It is in the interest of every OVA member to attend the virtual board meeting on Tuesday July 21, ask questions and demand answers.  Below are the links for this coming Tuesday’s meeting:

Click on this link at (or just before) 1:00 pm on Tuesday: https://www.OakmontVillage.Com/Live

Ask questions or make comments at Open Forum by sending an email to: AskOva@OakmontVillage.com

Share this page:
Posted in Features, Opinion
← AGP: There is NO Good News HereOVA Members Still Wait for Financial Details of Funds Sent to AGP →