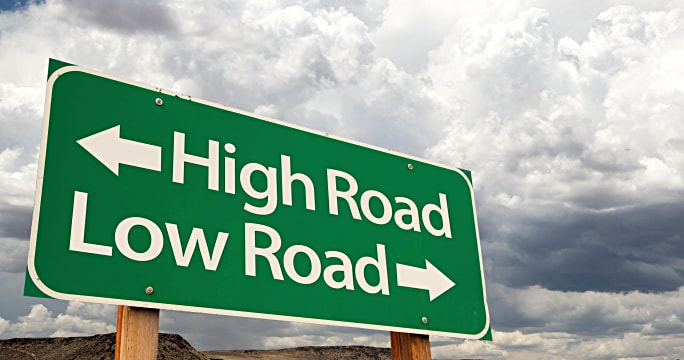 From the outset, let me be crystal clear. I believe that OVA purchase of OGC would be a serious mistake that would ignore the welfare of those who might eventually lose their homes as a result. For this and other reasons elaborated below

I urge you to vote NO on the proposed 31% dues increase.

Whether or not OVA should buy OGC is the hottest topic in Oakmont since pickleball, as well it should be since at least ten times as much money is at stake, as well as the future identity of Oakmont. Will we continue to be a middle-class retirement community with middle-class amenities and dues, which surrounds a golf course, or will we become an upper-middle-class retirement community with better amenities and high dues to support them, including an embedded golf course subsidized by all?

No matter which side you are on, everyone who understands the golf course issue realizes that Oakmont is at a crossroads. Five years from now, OVA will be very different if we buy the golf courses from what it will be if we don’t. But most people don’t realize that the difference will be much greater than just whether or not the golf property then belongs to OVA. If that statement is a mystery to you, I’d like to suggest you read my last September’s article entitled Visions of Oakmont. I believe there are two broadly different visions of Oakmont, which in this article I will call the High Road and the Low Road. The details can have infinite variation, but the fundamental characteristics of these different OVA visions are identified below.

The current Board and many of the people on critical committees are high-roaders. A typical sentiment of high-roaders was expressed by Iris Harrell at the June 25 town hall:

“… the land that is contiguous to this, … those two golf courses behind central, is really critical for us to get part of that, to … look at multiple options for what we can do here in central.”

What Iris and this Board have in mind includes: expanded Berger to make room for more attendees, expanded CAC to include a larger fitness center and more meeting room space, and a new building with auditorium seating.  They may not have made any decision to pursue any particular project, but this is the direction they are going.

The fundamental positions which drive each of these visions will be further examined below.

Dues are currently way too low, and should be much higher than they are now, to meet the needs of the OVA membership.
vs
Dues should be stable, rising little more than inflation.

Rossmoor is unquestionably expensive. The other communities are similar in costs to Oakmont, if you don’t consider the sub-HOA fees that half of us pay. If you take into account sub-HOA fees, which over half of us pay, then Oakmont is far more expensive than the “competitors” surveyed by the LRPC, even before the proposed 31% increase in dues for 2020. In short, the contention of the high-roaders, that OVA dues are excessively low compared to the competition, is false.

Every one of us who bought a home in Oakmont had the reasonable expectation that the Oakmont we observed before our purchase would remain more or less the same, with minor changes here and there and dues rising more or less the same as inflation. The proposed purchase of OGC would increase our dues dramatically more than inflation, violating the expectation of stability, and the fuller integration of the golf courses would change the very identity of Oakmont. What is worse is that such major increases as I expect to result from high-roader policies would threaten the very home of those in Oakmont who are least able to afford them. These often very elderly people, many of whom make little use of OVA faclities, should be considered one of the most important stakeholder groups in Oakmont, because they have the most to lose – their homes!

No one argues for deferring needed maintenance or for not upgrading facilities to meet safety and ADA requirements, but all of that should be met from the Asset Reserve Fund, following the recommended service calendar from the annual Reserve Study.

Similarly, no one argues against making modest capital improvements, including adding modest facilities which can be paid for from the Capital Improvement Fund.

The consensus of this committee based on the work done to-date is that the OVA facilities can currently adequately support the requirements of the Oakmont organizations for meeting room and activity space, and, since Oakmont is now built out, we should be able to continue to provide adequate meeting room and activity space into the future. Any discussion to remodel, expand or replace the Berger should eventually be decided on the basis of other criteria.

Why does the purchase of OGC by OVA have anything to do with this discussion of high-roaders and low-roaders?

First of all, of course, purchase of OGC will require a high dues increase, with the likely future that there will be more golf-related increases to come.

What is more important to the future of Oakmont, however, is that acquisition of land from OGC will facilitate expansion, enlarging Berger and CAC, adding parking, and most importantly, providing the space on which a future Board could decide to build an auditorium, an indoor swimming pool, or whatever amenity struck their fancies. If OVA does NOT acquire OGC property, then expansion of the central facilities is very limited by lack of space. This is good, from the low-roader perspective, because it thereby limits the foolish over-expenditure of OVA dues.

Is There a Middle Road?

There may be a middle road that includes modest expansion of facilities and services by OVA. But it cannot include purchase of OGC, because such a purchase would be a giant step accepting the High Road philosophy as a fait accompli.

The best time to stop the march toward a more exclusive, less middle-class Oakmont is now, by voting NO on the proposed dues increase!

Share this page:
Posted in Opinion and tagged OGC
← Missing Information Critical to Informed Voting: The QuailDoes a NO Vote Mean No OGC Purchase? NO!! →