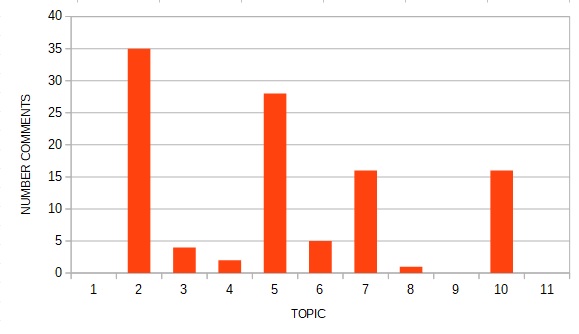 On Wednesday, June 12, a President’s Message entitled Social Media Survey was posted on the Oakmont Village website, and an on-line Nextdoor OVA/BOD Discussion Group Survey went live. In order to bring some reality to the discussion of this Nextdoor group, statistics were compiled on all topics originated in that group for a period from May 15 – 31, with replies through June 9. This period was chosen to be recent, with active discussions on-going, but not contaminated by the latest discussions, which are largely focused on the OVA “Nextdoor OVA/BOD Discussion Group Survey”.

Tallies of all posts and comments were made in a spreadsheet. These tallies count how many times each individual posted or commented on any of the topics listed in the Appendix. A post or comment is counted as Pro-BOD if it advocates a position or policy that has been promoted by the current Board, and Anti-BOD if it opposes or questions such a position or policy. It is counted as fact if it discusses facts with little or no editorial comment, or it describes and/or links to an external article with little or no editorial comment beyond short relevant quotes from the article. Finally, it is counted as Other if it doesn’t fit into one of these three categories. Examples are back and forth among commenters to clarify the meaning of an earlier comment, discussions about whether or not a post or article was appropriate or met Nextdoor guidelines, etc.

As listed in the Topics appendix, there were a total of 11 original posts to the Nextdoor OVA/BOD Discussion Group within the sample time period (May 15 – 31). Most related to either to the proposed golf course purchase, or to the push for allowing a membership vote on the topic, but there were also posts relating to Nextdoor guidelines, proposed Bylaws amendments and human decision making.

Statistics from the spreadsheet analysis for May 15-31:

Other observations from the review:

Caveat: It is impossible to know how representative this particular time period (May 15-31) is, although there is nothing to make one believe that it is atypical. But who among the members of the discussion group actually post messages varies over time, with personal concerns and with changes in what the topic of the moment happens to be. The hot topic as this is written is the survey itself, and authors are taking part who didn’t show up at all in the May 15-31 period.

As almost the only avenue for critical expression on Oakmont issues, the Nextdoor OVA/BOD Discussion Group naturally attracts more Board critics than Board supporters. But it is and always has been open to all Oakmont residents who post following Nextdoor guidelines for civil discourse. Charges that the existence of the Group threatens the peace and fosters polarization carry a grain of truth, but so does any political discussion where opposing views are argued; it is part of the democratic process. These topics and the current OVA survey are explored in more depth in the companion editorial, The OVA “NextDoor OVA/BOD Discussion Group Survey”. Also note that it is easy enough for the reader to do his own evaluation simply by reading the discussions by going to the OVA/BOD Discussion Group. If you wish, you may also click the Join Group, which allows you to receive Email updates, post and comment in the group.

Appendix: Topics Discussed in the Group During the Sample Period

All discussion topics initiated within the period from May 15 through May 31 are identified below:

1. Article on Oakmont golf course, May 15
Short post linking to Karen Oswald guest editorial in the Kenwood Press, no comments.

4. BOD Sidelines OVA Attorney with Dissenting Opinion, May 16
Post quoting and providing video of Steven Weil speaking to an earlier OVA Board, 2 comments.

5. AT last a legal opinion from an expert lawyer, May 16
Post applauding Weil’s opinion that HOAs should seek member approval for large expenditures, 28 comments.

6. Golf Course, May 17
Post complaining of the lack of transparency by the Board re purchasing the golf course and subsequent plans for the property, 5 comments.

8. Steve Spanier Hints of Possible Community Vote on Golf Course Purchase, May 19
Post quotes President’s Message on the topic, offers fact-based analysis and recommends a course of action assuming that a community vote is announced, 1 comment.

9. Oakmont Forum: Proposed Bylaws Amendments from the BRC, May 20
Post summarizing and linking to article of the same title in the Oakmont Observer, no comments.

11. The New Yorker Article ~ New discoveries about the human mind show the limitations of reason, May 31
Short post linking to a New Yorker article about human decision making, no comments.