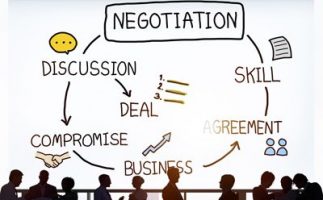 The current (and future) residents of Oakmont Village and the golf courses around which the village was developed have deeply intertwined interests.  Since Oakmont Village Association does not own the golf facilities, it shares a classic interdependent relationship with the Oakmont Golf Club: neither can simply walk away and neither can force the other to agree.  Their current engagement regarding “golf” should, and likely will, become a negotiation.

Two aspects of a successful negotiation deserve special attention in this situation.  To use the framework popularized by Roger Fisher and William Ury in their classic book Getting to Yes, these are Interests and Alternatives.

“Interests” are wants, needs, hopes, fears, and core principles.  We negotiate to determine whether or not we can satisfy our interests better through an agreement with another party than through actions we can take independently.  It is crucial to reflect upon, discern, and identify the interests we have at stake in a negotiation.  Even more important though is learning and understanding the interests of the other party. Since the other party can’t be forced to agree, the art of negotiation is to craft terms that will satisfy the other party’s interests – because otherwise it won’t agree – and that also will at least protect and perhaps advance our own interests.

“Alternatives” are the actions a party actually can take to satisfy its interests without the agreement or cooperation of the other.  Accurately assessing alternatives is crucial to a party’s ability to protect its core interests (its principles, its continued viability, the support of its constituents, etc.) in any given negotiation.   This is difficult because human beings naturally tend to exaggerate the righteousness or importance of their own interests and also tend to over-estimate – sometimes grossly – their actual alternatives.

A party’s ability to measure the acceptability of any proposed agreement requires accurate assessment of what Fisher and Ury termed its Best Alternative To a Negotiated Agreement, its BATNA.  BATNA represents the best set of actions a party can take to protect and perhaps advance its interests without the assent, participation or cooperation of the other party.  If the terms of a proposed agreement do not satisfy a party’s interests better than executing its BATNA would do, then the party should walk away from the negotiation. Conversely, if the terms of a proposed agreement at least protect and perhaps advance a party’s interests better than the most effective actions it can take independently, it should agree.

OVA Vice President Tom Kendrick has seen and evaluated OGC-provided financial and operational information.  He led the recent OVA Town Hall on Golf.  A reasonable conclusion from his observations and comments is that OVA doubts the sustainability of a 36 hole, two-course golf operation in Oakmont without a substantial infusion of financial support from some source.  Based on its public statements and the dimensions of its “ask,” OGC probably sees the prospects for sustaining the status quo in a similar way.  So there appears to be agreement that the “problem” at the core of the coming negotiation is long term.

In preparation for the negotiation, OVA must discern and as accurately as possible assess OGC’s BATNA. The way to get that most clearly in view is to ask: What is the best long term outcome OGC can achieve if OVA were to refuse to be a source of any income?

Notwithstanding OGC’s wanting – for good and understandable reasons – to keep the status quo (36 holes on two separate courses of different design and catering to different player needs), its BATNA may not be very good.  Would not OGC be forced to conclude, in the absence of substantial additional income from OVA, that 36 holes of golf are, unfortunately, unsustainable in the long term?  Does OGC have any other plausible, reliable source of additional income sufficient to sustain, much less improve, the current level of golf operations?  If not, then the status quo of 36 holes and two courses for golf is actually a burden it likely cannot carry in the long term – a burden that could even threaten the viability of OGC’s ownership.

OVA should refocus its attention to its own long term interests instead of reactively generating ideas for near term financial contributions to OGC.

OVA appears to have identified a primary long-term interest in the sustainability of “golf” in Oakmont village.  This is hardly unreasonable.  The village is built around the golf courses.  Its attractiveness to future buyers (crucial given the designed turnover of a 55+ community) as well as the property values of some (and a logical argument can be made for “all”) current residents are intertwined with golf.  A not insignificant number of residents play golf.  Some are members of OGC including some member-owners.

But the golf courses constitute not just attractive and challenging venues for playing golf.  They are also significant aesthetic amenities to the village – as greenbelts, as anchors to fabulous views of this magical place, even arguably as firebreaks for some locations.  It’s important to emphasize that OVA’s long term interests in Oakmont’s golf facilities attach not to ownership but to the broad potential scope of use (for golf, as greenbelts, as protection against the risk of deteriorating appearance and property values and potentially for other recreational activities wanted by current residents and perhaps even preferred by future residents).  Sustaining attractive and challenging venues for playing golf at Oakmont does not require maintaining forever the 36 hole status quo.

One possible reframing of the problem at the core of this negotiation is: How can OVA relieve OGC of some of the burden that it likely cannot carry in the long term while also advancing its own long term interests?

Here’s one possibility opened up by that problem statement.  OVA can lease land.  Since construction of an assisted living/memory care facility has been put on hold, the OVA manager currently is investigating leasing the land behind Oakmont Gardens for a dog park.  Might OVA lease 9 holes of the Executive Course from OGC and take on the costs of maintaining that land as a greenbelt?

Joint investigation and problem-solving would be required.

What might be the negotiated price of leasing the land plus basic maintenance of it as a greenbelt?  How does that compare to the cost of near term financial assistance that is plausibly sufficient to result in long term sustainability of the status quo?   How improved would OGC’s ability to sustain the remaining 27 hole operation be if it had steady lease income at some to-be-determined level and did not have to maintain and operate 9 holes-worth of golf operations, but could still offer 18 Executive holes (9 played twice)?  How would OGC calculate the value of continuing lease income in exchange for shedding a level of continuing maintenance and operational costs as well as protecting its viability as owner without giving up ownership rights to the land?

And how might OVA wish to utilize the greenbelt if it were potentially a long term lessee?  The parties are free to negotiate the terms of leasing – the amount to be paid; the duration; how the land may and may not be used; conditions for renewing, renegotiating and terminating the lease; and provisions for settling any disputes.

The idea of leasing may or may not be fruitful.  But it illustrates why OVA should pivot away from just responding to OGC’s “ask” toward negotiating an agreement intended to protect and advance OVA’s long term use interests.

OVA can benefit significantly from reframing its negotiating relationship with OGC.

OVA has allowed OGC to control the public narrative and to frame the engagement over golf as simply an “ask” requiring a response lest abandoned golf courses go to weeds and ruin property values.  As a result, OVA has been positioned as just a potential funding source for sustaining OGC’s golf operations because everyone understands that OVA has no wish to get entangled in formal partnership or ownership.

At the Town Hall Vice President Kendrick stated that he hoped financial support to OGC would be forthcoming. He also stated that financial support would be limited by two conditions: 1) OGC would have to provide “concrete value” comparable to OVA’s interests and 2) the support would have to plausibly put OGC in a more stable position financially “in the near future” and could not be structured either as recurring or as an obligation.

The main OVA-presented ideas for residents’ reaction were certain small parcel land acquisitions, sharing maintenance costs, and contributing toward the costs of pond clearance and water management.  In short, although the problem posed was one of long term sustainability, the ideas were focused on rationales for near term contributions.  It was not clear how they could be sufficient for long term sustainability.

What if OVA reframed its role in an upcoming negotiation from Potential Funding Source to Potential Venture Capital Investor?  In that role, might OVA wish at least to consider finding ways to make certain continuing investments IF those investments protected and advanced OVA’s long term interests?

Based on the public record to date, OGC needs some “tough love” from OVA regarding the reality of OGC’s alternatives.  OVA should free itself from OGC’s frame, and instead approach the negotiation as a potentially collaborative venture capitalist open to proposals for investing in the long term sustainability of “golf” in Oakmont Village: “You want our money to meet your needs? Welcome to our Shark Tank.  We’ll be happy to disclose our long term interests to you and to learn yours.  Then make us some proposals.  We might even have some proposals for you.  Let’s talk!”

Reframing OVA’s role in the coming negotiation and refocusing on long term interests potentially allows ideating much more broadly about “value comparable to OVA’s interests.”  Without having to own golf courses, OVA nevertheless can condition investing financial support that OGC wants and needs on the presence, commitment to, and ongoing performance of elements in OGC’s business plan that further OVA’s long term interests.

So, how would OVA wish OGC to spend conceivable financial contributions it might be willing to make going forward?  On improving the Quail Inn?  On providing walking access to some portions of the course(s) after some set seasonal time? On leasing a portion of the course(s) for OVA use?  What ARE OVA’s long-term interests attached to sustaining “golf “in Oakmont Village that a negotiated agreement might advance?  Focusing there is where OVA should be spending its time.

Fortunately for residents, the parties have time.  OGC says it is not at risk of failure.  OVA Vice President Kendrick characterized the problem at the Town Hall as one of sustainability.  It is well worth taking the time required to understand all of the dimensions of this long-term problem rather than jumping prematurely to potentially less-than-optimal solutions.

The appropriate tasks for OVA regarding “golf” in Oakmont are to determine the long term interests of its members and to negotiate an agreement with OGC that advances them.

Share this page:
Posted in Opinion and tagged Oakmont Golf Club, OGC, OGC Subsidy
← How Sustainable are the OGC’s Operations?July 17 – OVA Board of Directors Votes [VIDEO] →