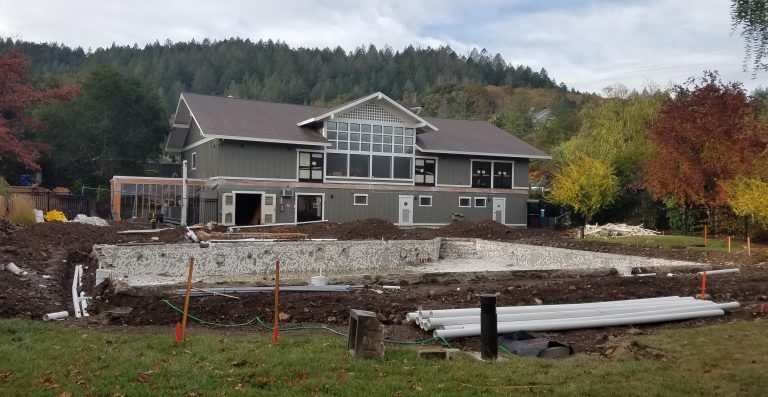 At the November 13 OVA board meeting the membership was given an update on the ERC construction project.  Two weeks prior to the meeting it had been announced that additional costs of $413,975 by a change order were being added to the budget.  Then at the board meeting this amount was supplemented by an additional $102,000 in contingency funds, bringing the latest cost overrun potentially to $515,975 and the total construction costs to $2,778,000.

Add to this the interest and fees on the $1.6 million loan that OVA is using to finance the project and the total cost is over $3 million.

A little over a year ago in October 2017, Building Construction Committee Chair Iris Harrell gave a cost estimate for the project of $1.5 million.  In April of this year a contract was signed with Nordby Construction for $1.734 million. Approved expenditures increased in June to just under $2.3 million, which included four change orders before a shovel even hit the dirt.  With the latest change order No. 6 approved this month the project cost has risen to well over a million dollars above the contract price from six months ago and double the estimate from a year ago.

Four years ago when plans for a West Rec remodel were being discussed one board member noted that “every one of the last six or seven major projects came in over estimates.”  With the news of yet another OVA construction project being over budget, it raises the question as to whether those entrusted with managing these projects have learned from past experiences and errors in budgeting.

Expensive and unplanned ADA requirements, problems with underground water, electrical and gas lines, as well as unforeseen problems inside the building led to the WRC cost overruns.  And these are the same issues that are again being claimed as justification for cost overruns on the ERC project as if they were unexpected or unforeseen.

“We now know that remodeling an older building could ultimately lead to a more extensive renovation, instead of just being a simple remodel.  This is a big cost difference between a remodel and a renovation,” said former OVA Manager Cassie Turner, quoted in the Oakmont News in August 2015. Turner also said the lessons learned from the West Rec project make it clear that “we need to keep our financial resources up for unexpected maintenance and repairs as a consequence of having older buildings.”

Director Tom Kendrick at the November 13 board meeting said, “As you dig you find stuff. And one of the things that was disappointing about this project is that some of what we found was not what we were hoping for.”

An OVA member with many years of experience in construction project management pointed out that “any contractor or engineer knows that if you remove a depth of two feet of soil, compaction work will be required when you reinstall new soil.  This should have been estimated in the original scope of work and budget.”

In addition, “the huge costs for replacing all the underground utilities should have been in the initial budget.  The contractor saved significant excavation costs by being able to excavate without protecting the underground utilities.”  New additional costs of $142,506 are included in the current change order for further demolition, paving, grading and excavation. The original contract in April had already included more than $660,000 for these and other site work costs.

“We must realize that a good project manager tries to avoid change orders as the contractor can basically ‘name their price.’  We are on change order number 6 on this project. Looking over the items they all should have been included in the initial scope.”

What can we do to guard against these serious cost overruns in the future?  The following suggestions were made by two construction project management specialists who were interviewed for this article:

~~ It appears that the process used to define the scope of work and to budget for construction projects is flawed. The Board should not approve projects that are not clearly defined. Prior to approval by the Board, the project should be 90% defined in design and scope before taking bids and submitting plans to the city for permits.  This will limit the number and size of change orders, which are expensive and add significantly to costs of the project.

~~ Contingency funds should be used strictly for unknowns, such as weather delays and unforeseen circumstances, not for changes in scope. In the ERC project the underground work in the pool area should have been in the original scope and budget, especially since OVA and Nordby Construction encountered similar issues during the WRC pool project.

~~ Soliciting at least three competitive bids should also be the defined practice for expensive construction projects.  In this circumstance, a decision was made over a year ago to solicit a single preconstruction services contract to get the ERC project started as soon as possible in light of the perceived demands for construction services after the fires in Sonoma County.  Soliciting single bids for large constructions projects should not become a regular practice.

~~ For future projects over $1 million OVA should contract with an independent construction manager to oversee the project.  Earlier this year OVA signed a contract with Nordby Construction, the building contractor, in the amount of $146,000 to provide its own “job site management” on the current ERC project.  To avoid possible conflicts of interest and to control costs a Project Management Professional (PMP) Certified project manager should be brought on board prior to signing a design contract. They could assist the BOD in the project scope definition, contract bidding and the awarding of both design and construction contracts.

There is an old proverb that goes “All that is old is new again.”  It is often used in the context of old fashions or opinions becoming fashionable again.  If we could apply this phrase here, it would be encouraging to use it solely as a description of the ongoing maintenance and upgrade of our aging OVA facilities. Making things new again is an admirable pursuit and falls within the fiduciary duty of those entrusted with overseeing a homeowner association’s assets and facilities. However, it is dismaying when it suggests that old mistakes are repeated and lessons are not learned.