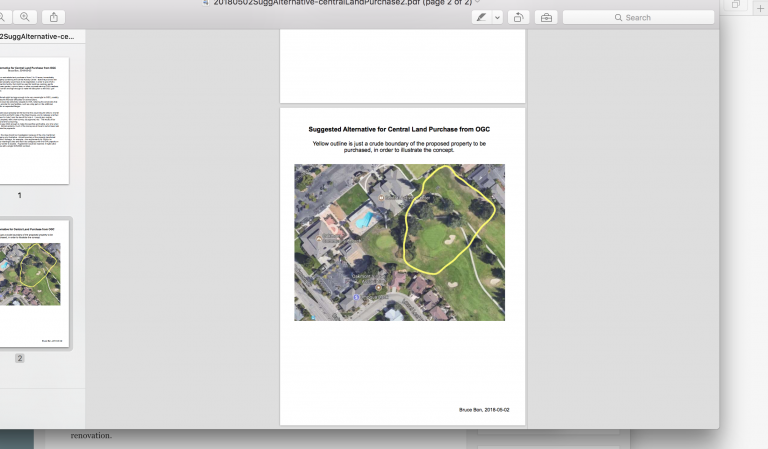 “Please provide your suggestion(s), no later than May 20, via Email or in writing, 6637 Oakmont Drive – AskOVA@oakmontvillage.com” ~ Steve Spanier, OVA

PHOTO: Yellow outline is just a crude boundary of the proposed property to be purchased, in order to illustrate the concept.

OVA and OGC negotiate a real estate land purchase of from 2 to 10 acres, immediately adjacent to the OVA property containing the Central Activity Center. Both the price and the boundary of the purchased property would have to be negotiated, in order to give OVA a valuable addition to the central facility, that might be used for buildings, parking, sports facilities, a dog park, a flower garden, a picnic area, or other purposes serving OVA members. The price would have to be fair and high enough to make the disruption to the OGC golf courses worth the trouble.

In spite of the problems, this idea should be investigated, because of the pros mentioned above. The attached map is only illustrative. Actual boundary of the property transferred might only affect one of the 2 fairways, for example – the requirements for OVA to be interested are that it be a meaningful area and that it be contiguous with the OVA property on which the Central Activity Center is located. If agreement could be reached, it might solve OGC’s financial difficulties with a single OVA/OGC contract.

OGC, in cooperation with OVA, develops a scheduling system that will allow OVA to rent meeting space from OGC, with a rental rate schedule negotiated in advance. Spaces to be rented under this agreement might include meeting/banquet rooms at the Quail Inn and the Golf Club House room at the East Course. OGC would have priority on such spaces, but once a room was scheduled, OGC would not have the right to bump an OVA reservation.

OGC searches for a buyer who will continue to operate the golf courses and the Quail Inn. The buyer would need to be a company, such as ClubCorp, which has an interest in owning and managing golf courses as commercial enterprises.

Questions to be answered include whether or not such a buyer could be found.

The following set of questions were sent to Barbara Robinson prior to the February 26 “town hall” meeting, but were neither acknowledged nor answered. OGC needs to understand that, unless they are willing to answer questions like these, they will continue to face strong opposition from many Oakmonters, and the OVA Board of Directors answers to us. The June 5 informational meeting will be a good opportunity for OGC representatives to demonstrate an openness that has been missing in the past, in order to begin to regain the trust that was lost by the failure to inform us adequately in the previous two meetings. If there is some good reason that this information cannot be divulged to us all, it will be the opportunity for OGC advocates to explain why, but such an explanation needs to be convincing. Failure to provide good reasons for coming to OVA for help will only solidify and increase opposition to any form of cooperation that might include dollars being transferred from OVA to OGC.

What is the approximate value of the two full pages that OGC receives for free in every issue of the Oakmont News? How much would it cost OGC if it was to pay the same amount as any commercial, for-profit business must for advertising space?

OGC has chosen to open negotiation concerning the cooperative relationship between them and OVA, so it seems only fair that, for us to understand the complete picture, the value of free publicity and advertising provided by the Oakmont News should be considered.