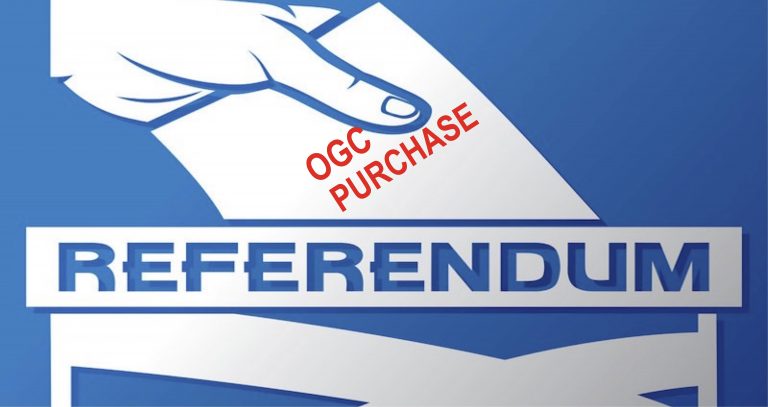 If the Board of Directors really wants to promote full, open and civil discourse about the potential of OVA purchasing OGC with attendant significant dues and/or assessment increases, the current Directors and candidates for Director on the next Board should commit – now, in advance – to having an OVA member referendum if purchase is proposed.

First, in carrying out its fiduciary duty of representing the best interests of the entire community, it is the Board’s obligation to do everything possible to assure the acceptability of any such decision.

Acceptability means that those who oppose the action had the opportunity to voice and act on their opposition and, should they be on the losing side of the question, can therefore see, understand and accept the inherent and demonstrable legitimacy of a contrary outcome.

A referendum ensures acceptability because on its face a referendum is FAIR both as to substance and as to process.

Second, on such a major question that would reverse a decision taken by vote of the OVA membership in 1989, if that matter is now to be revisited a referendum is, on its face, the RIGHT thing to do.

The membership vote 30 years ago cannot be regarded or treated legitimately as mere historical background to new circumstances. Reasonable people can differ about the significance of the margin of the 1989 vote and whether the decision not to purchase the golf courses was “good” or “bad” for Oakmont. But there can be no doubt that it was a watershed decision for the future of the community, just as the potential question of purchasing or not purchasing the golf courses would be now. If that 1989 membership-wide decision is to be undone, legitimacy cannot be attained simply from an action taken by any given incumbent seven-member Board.

Third, a referendum is a PRACTICAL reality not worth dodging or obfuscating. As Director Kendrick observed at the March 5 Board workshop, it is inconceivable that the amount necessary for purchase would fail to trigger the dues or the assessment provisions, or both, of the current governing documents that require a vote.

Therefore, I urge each current Director and each candidate for the next Board, at this early and formative stage, to vouchsafe the acceptability of any potential decision to buy the golf courses through some combination of dues increases, assessments and probably cutbacks and/or delays in planned major renovations, by making the following pledge:

1) commit to gathering objectively all of the arguably relevant information it is possible to gather without preconception as to relevance or importance;

2) commit to wide dissemination of all the relevant information gathered;

3) commit to being 100% transparent in process;

4) commit to making publicly the strongest case for purchase, such as in the Oakmont News, and to providing for the expression in point-counterpoint fashion of a case for opposition;

5) commit to a referendum on any proposed purchase decision.

Nothing can assure the acceptability of an ultimate decision to purchase more than Directors and candidates committing – at this EARLY stage of these considerations – to a referendum on any proposed purchase. Few actions could threaten the acceptability and legitimacy of any given result more than a refusal of Directors and candidates to make and carry out such a fair, reasonable and practical commitment.

Share this page:
Posted in Opinion
← Is the Sky Really Falling?It is time to face reality →