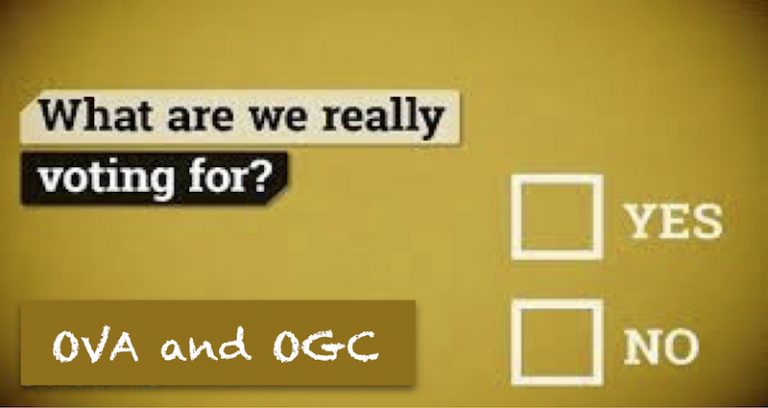 There have been many opinions and concerns expressed in social media, newsprint, and word of mouth (both for and against) regarding the possible purchase of the Oakmont Golf Club (OGC) property by the Oakmont Village Association (OVA). As in any controversial subject, there have been some conflicts between various groups and personalities but those should mostly be ignored as “politics at work”.

I do however, disagree with some of the posturing and maneuvering expressed in OVA communications as well as some of the more vocal online comments on both sides of the issue. Everyone has a right to express their views, and they should do so with facts pertinent to the subject. The need to disparage others views is not necessary.

Although I no longer play golf, I personally enjoy living in a community with a golf course as a part of the available recreational activities. However, if the future of golf in Oakmont is limited (as noted by several indicators – as well as OVA’s own consultant broker) I am not in favor of supporting it with an OVA dues increase and a very high probability that several added millions of dollars will be needed in a losing effort.  Also, locking in a long term contract to lease the golf facilities will prevent future OVA BODs from implementing other needed capital projects.

In addition to the above, my opposition to the purchase of the OGC property by the OVA is based on the following:

1. The OGC issue has been discussed for over a year but the OVA has provided very little information about the intended long term use of the OGC property. That should have been an obvious requirement for any corporate board to meet the fiduciary responsibility.

2.  The OVA BOD has called for a YES or NO vote for a 30% dues increase in 2020, but the ballot does not stipulate how the majority of the 30% dues increase will be used.  It was suggested in the 6/25/19 meeting that about $20.00 (of the $23.00 increase may be used for the OGC purchase and operational deficit.) If no purchase is achieved, what will the increased dues be applied to?  What will the OVA do if a quorum is not attained or if the vote is not supported?  4.

3. The OVA BOD has (apparently) selected a “partner” that could manage both courses and the Quail. However, $2.5 million of the approximate $3.5 million costs of “required” upgrade or maintenance work will be borne by the OVA. In addition, the first $500K per year of operating shortfall will be paid by the OVA for up to five years.  That is a “guaranteed” $2.5 million liability for the OVA. Where is the incentive for the operator to manage costs?

4. The OVA operates as a 501(c)(7) not for profit entity with legal restriction on outside income. It seems that the OVA will create an entirely new LLC/Corp to hopefully nullify the problem of  OVA’s ownership of a business open to the general public. That is a very risky plan. There are several IRS determination letters that disallow “workarounds for tax avoidance for outside income” .

It is difficult to understand why some Oakmont residents are willing to allow the OVA directors to take on an $8 million to $13 million liability without its members knowing the facts or the planning concepts for a radical change in the nature of the OVA.

For the past several years, the OVA board has shown that it has difficulty maintaining financial control or the planning necessary for even moderate projects. Inadequate fiscal oversight of the WRC and ERC projects led to several major contract increases and the borrowing of (up to) $1.6 million for the ERC completion.

With that background, how can the membership be expected to support a very large and inherently risky proposal without some basic information on how the proposed purchase will challenge Oakmont’s financial, management, and planning systems?

The OVA’s primary focus should be to adequately maintain current facilities, upgrade or replace those facilities when verified needs exists, and do so within the parameters of available cash flows and budgeted reserves. Loans may be an appropriate means for efficient operation but they should not be used for project financing that could negatively compromise the organization’s financial position or the economic future of the Oakmont community.